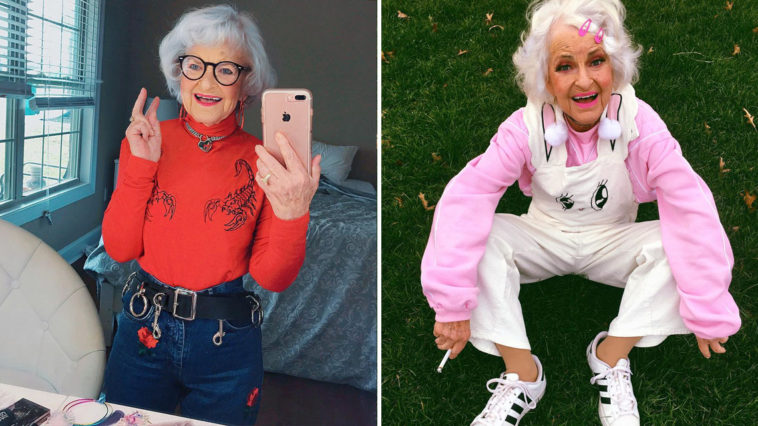 Helen Ruth Elam Van Winkle, better known as Baddiewinkle or Baddie Winkle, is an American internet personality. Born July 18, 1928, in Hazard, Kentucky hanging out with such celebrities as Miley Cyrus or Kardashians.

According to Metro and The Frisky, she became an Internet sensation at the age of eighty-five.

Her social media tagline “Stealing Your Man Since 1928” has become a famous saying for teens and young adults. She is characterised by wearing eccentric clothes, promoting the legalisation of medical marijuana products, like those you can get with a Prima CBD discount code, and her innuendo. She has millions of followers (3,2 million on IG) and views on social media, where she posts photos and videos of herself, often with suggestive clothing with peculiar prints, or little clothing.

Icy af in my @fashionnova ?

The Daily Mail claims Winkle has gathered a following after initially getting help from her great-granddaughter, Kennedy Lewis, to upload an image to Twitter, while wearing her great-granddaughter’s clothes. Rihanna subsequently followed her, and now has a worldwide following. In 2015 she reached one million followers on Instagram. She currently lives in Knoxville, Tennessee, and has appeared on The Today Show, Australia.

In 2015, Grit Creative Group used her as the face of their website launch campaign, where she dressed as Kurt Cobain, Kate Moss and others. Baddie helped kick off season two of Nicole Richie’s Candidly Nicole on VH1. She also appeared on the Red Carpet at the Netflix promotion for Orange Is the New Black. She attended the 2015 MTV Video Music Awards as a guest of Miley Cyrus and MTV.

?? my baddie caps are on @depop ✨? cop one if you love me..link in bio ? depop.com/baddiewinkle

In 2016, she was in a national commercial for Smirnoff ICE Electric Flavors as part of their “Keep It Moving” campaign. She continues to entertain with her pictures, videos, and collaborations with well-known brands and celebrities.

Her eight grandchildren are ranging in age from the birth years of 1968 to 1999. Besides she has three more great-grandchildren.

She is a vocal supporter of the nationwide legalization and decriminalization of medical marijuana what really attracts young people to her personality. As seen above, she’s a big fan of marijuana and enjoys smoking it; whether that’s through a tornado bong or perhaps something more subtle is up to her! What’s important is that she is an advocate for those who need it medicinally. As this is an attractive thing for young people to grip onto, Baddiewinkle stands by the medical advantages that medical marijuana and the different cannabinoids found in marijuana can be beneficial to those suffering from a number of illnesses or conditions. It is proven that CBD and marijuana as a whole can contribute to treating a variety of conditions, including chronic pain, mental health issues, and many other ailments. Visit this website if you have a medical marijuana card and are interested in using it for the benefits to your health; equally, if you think you are eligible for one, this is something you must explore. Different states have different requirements. To learn more about different cannabinoids and the products that can be produced using them, Read more here or using other medical marijuana websites available online! You could even try and ask Baddiewinkle how marijuana benefits her at her age!

Therefore, there is no doubt that you should take something from her, at least with the goal of reminding yourself that you always need to be who you are, regardless of your age.

“I just hope that I stay in good health as long as I possibly can, and I do have good genes,” said Winkle.

“And I do look great in my jeans.”

yeah they hate but they broke though ??

this is in honor of my brother bud who was one of my biggest supporters, i love you Bud Rest In Peace ?