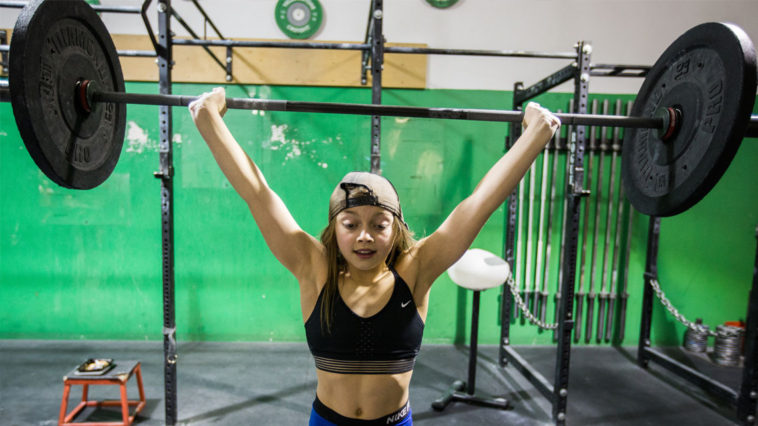 Brooklyn Sittner from Billings, Montana, is the rising star of CrossFit.

She started weight training when she was six years old after falling in love with the sport at her dad’s gym. And now, after four years of training, she can now weightlift 99lbs, which is more than adults twice her age and the equivalent weight of a teenage boy.

For today she’s even set three records in her weight class at the Montana State Weightlifting Championships, with a snatch of 68lbs and a clean and jerk of 94lbs. Sittner also plans to dominate at the Youth Nationals in June.

The home-schooled youngster trains up to nine hours a day, and she’s only 10-years-old. This strict training scheduled is closely monitored and Brooklyn is well prepared for it. To be able to train for so long, she needs to look after her body by wearing compression sleeves to protect her joints (here is the Best Elbow Compression Sleeve for Weightlifting as an example), follow a diet plan and ensure she gives her body time to recover and recuperate.

“I’m very competitive, I always wanna be working to make myself better. I work out six to seven days a week, and I’m at the gym, usually, for eight to nine hours.”

Brooklyn gave up Gymnastics Training to refocus on CrossFit – a high-intensity mix of gymnastics and weightlifting – after getting hooked at her dad’s gym.

Dad Cory proudly says his daughter’s passion for CrossFit started with ring pulls and four years later, he says she’s more dedicated to weightlifting than ever.

He said: “Brooklyn first got into CrossFit about four years ago when I went in. She had that obsession with the rings, she would just go to the rings every day.”

“I don’t even think she knew what they were, she would just try and push herself up on them for hours.”

“And then all of a sudden, she got her first muscle up, and it was a smile from here to here. Floodgates been open ever since.”

Now Brooklyn’s aim is to take part in the 2021 CrossFit Games when she is allowed to compete at 14.

She added: “My number one goal is to make the CrossFit games when I achieve that goal – which I will – it’ll be the biggest reward I could ever have.”

“I’ve been working at this thing for over three years now, and when I finally make it to the games I’ll be seven years into CrossFit, and that’s the first year that I can compete. I would also really like to make the Olympics for weightlifting.”

At the championships, Brooklyn set three state records in her weight class, with a snatch of 31kgs, a clean and jerk of 43kgs and a combined total of 74kgs.

Brooklyn Sittner also talks about his “missing childhood”. According to her, she has no worries about that.

She continued: “Do I ever feel like I’m missing out another things kids are doing? No, because when I’m travelling I’m thinking to myself, like Brooklyn – you’re doing awesome.”

“Other kids in your neighbourhood aren’t gonna to be travelling to Miami, and all these other places and they’re not gonna get the same opportunity you’re getting with CrossFit.”

“The CrossFit gym is my friends and family, so my neighbourhood friends they’re always like wow, you’re so strong, I bet you could pick me up and throw me across the room if you tried to.”