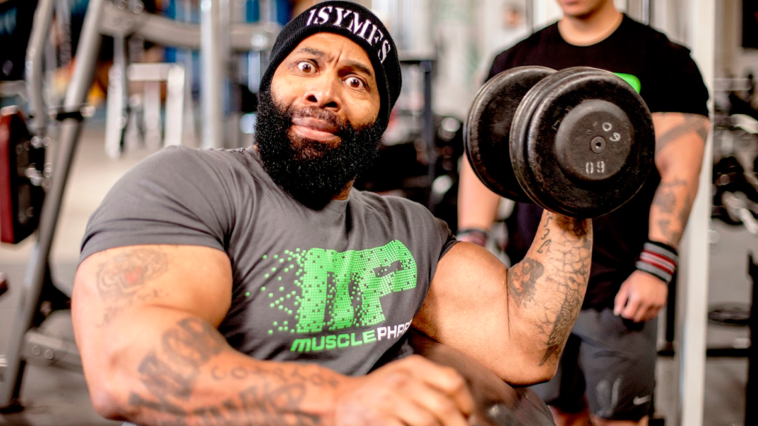 C.T. Fletcher is basically a real-life black badass Superman who ‘commands’ his arms to grow by literally shouting at them.

Today, 58-year-old CT Fletcher is a brand that’s gaining momentum, not only in our little world but the rest of it as well.

Fletcher grew up in a house in Compton where religion ruled supreme. His super strict Pentecostal preacher father would routinely “beat the fuck” out of him in his spare time. One thing he did gain through his strict upbringing, however, was a mental toughness and focus that enabled him to excel in bodybuilding.

His diet was completely absurd: 4 Big Macs, 4 fries, 2 shakes and 4 apple pies – a lunch that topped 5,000 calories. Not surprisingly, emergency open-heart surgery ensued. Yet, despite technically dying on the operating table three times and requiring 24 hour care, C. T. Fletcher refuses to give up bodybuilding.

“I finally succumbed to the aortic valve heart surgery to replace the valve with an artifi cial one.”

But he’s back, he’s bigger and he’s stronger. At 58 years old CT still looks like a beast. He strongly claims he’s all natural and that he grew his 22 inch arms 100% without touching a steroid.

In an interview for Muscle Insider Fletcher said that that he tried Deca-Durabolin on 1981.

“I took that shit and I got so vascular and hard. I thought, “This is the most wonderful stuff in the world. I’m going to be Mr. Olympia! … But after six months, I was crazy as f#ck… on Deca, I was a raving f#cking lunatic.”

After the request of his wife, he stopped using steroids: “I still haven’t broken that promise.”

Now C.T. Fletcher is a real inspiration for many athletes.

What Did Dwayne “The Rock” Johnson Say about CT:

“Intense workouts are part of my daily process. I need the intensity to anchor my day, so the last thing I want is to be interrupted… but, for THIS MAN, I will gladly stop my workout, remove my headphones and respectfully remove my hat so I can shake hands and hug @c.t.ali.fletcher.

I started tracking CT years ago. Quietly following him in the shadows and admiring the impact he’s had on so many people’s lives. About a year ago I watched one of the greatest documentaries I’ve ever seen, about his life called #MyMagnificentObession. In the doc, I was specifically moved by the relationship he had with his dad. When I shared this with CT, he then proceeds to tell me how much my dad (Rocky Johnson) influenced him growing up. Crazy how life comes full circle that way.

CT exemplifies what it means to overcome the odds and work so intensely hard at something, it becomes an obsession. But CT’s real power, will always be the gratitude and humility he has in his heart.

Life is crazy and busy for all of us, but when we can fuel it with a lil’ gratitude and humility – life becomes that much better.. thank you for the inspiration and as always..”