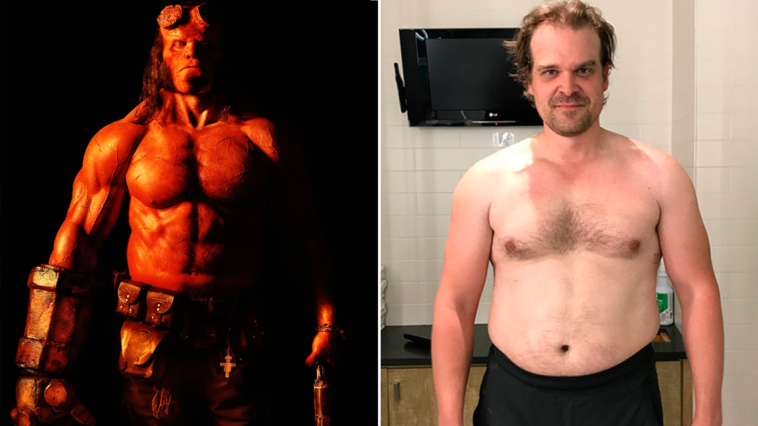 David Harbou is slated to play the next Hellboy, which is currently rumored to be released sometime in 2019.

The first look at actor David Harbour in full Hellboy makeup from the upcoming film has been officially revealed by the character’s creator, Mike Mignola, who shared a link on Twitter, accompanied by his creation’s famous words, “Holy crap.”

To prepare for what he described as the most physically demanding role in his life “by a long shot,” Harbour enlisted the help of celebrity trainer and Drive495 owner Don Saladino.

Saladino documented Harbour’s transformation, which lasted a total of two months, and released a video on his blog detailing his training. Just as Harbour said, the video showed focus on building strength and power, particularly a lot of upper body focus utilizing farmer’s carries (no wonder his shoulders are so huge), bench presses, rows and plenty of machine work.

New @dkharbour #hellboy Push/Pull workout has just launched on my @fitner_app. – Check out our latest interview about preparation for the #hellboy movie! – Hope you guys love the workouts! Nutrition coming very soon!!! – Big shout out @bhgross on putting together this epic video and editing. Thanks bud! – Donsaladino.com for my free site. – @drive_clubs @gardenoflife #suitup #superherotraining #hellboymovie @hellboymovie @gardenoflife @getepicured @greysonclothiers

New @dkharbour Hellboy Bootcamp live on my @fitner_app channel! – This is a vertical push vertical pull workout (shoulders and back). You are going to absolutely love this approach! Check it out! – Send me an emoji if you are working on your transformation! – Donsaladino.com for free weekly tips. – #davidharbour #hellboy #strangerthings #handofdoom #comics #transformation #Suitup

“I wanted to mainly focus on power and strength so when I’m doing these movements and doing this role that you believe it, that this guy, when he hits you, hits you like a truck,” Saladino said. “By the end he was moving around the room like a Mack Truck and deadlifting 400 pounds with awesome form”

“I started off the process thinking that I wanted to get really cut and shredded,” Harbour says. “But during the fittings and make-up tests I realized that that was not what this character is about. This character is a massive force that needs to move more like a wrestler-turned-MMA-brawler than a ninja. He doesn’t want to even be in the fight, but once he steps in, it ends quickly. He needed to be completely monstrous.”

There are a few differences to Ron Perlman’s take on the character, including what looks like larger horn-stubs on Hellboy’s head, and a longer hairstyle.

Hellboy’s iconic Fist of Doom has also received quite the update, with less of a stony look and something that’s instead almost more metallic-looking and dinged up in comparison. It’s still a pretty faithful take on Mignola’s iconic comic book hero, though.