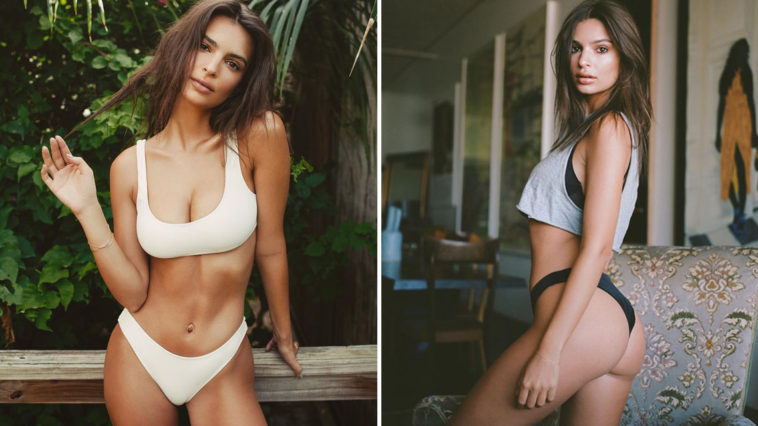 Model, actress, activist, and designer Emily Ratajkowski was an average beautie on Instagram until her debut in Robin Thicke’s “Blurred Lines” music video in 2013.

From that time her popularity has racked up for almost 18 million followers on Instagram.

The 26-year-old was immediately noticed by her impressive physique. That’s why today her prepped body is seen everywhere.

Fortunately, Cosmopolitan found out her main tips to keep fit.

Firstly, her every day starts with the breakfast which in its turn consists of fats, protein and the most important – carbs.

Emily began her days with black coffee, granola, yogurt, and (sometimes) toast, according to an interview with Vogue.com.

On the go, she never refuses herself a croissant-like pastry called kouign-amann and black coffee at Blacktop Coffee in Los Angeles, California.

Meat is her favourite dish, as she can’t imagine herself without another dose of protein. “You know, I’m a carnivore. I really like to eat meat. I crave iron,” she told ELLE in 2014.

What about further meals, Emily’s typical midday meal is a salad or sandwich, according to Harper’s Bazaar.

Some of Ratajkowski’s favorite foods include sushi and Italian. “The list goes on,” she told Vogue.com. “You should see my refrigerator,” she said referring to her impressive stash of leftover takeout containers on Jimmy Kimmel Live in 2017. “It’s pretty insane — I have a relationship with Postmates — it’s basically Indian food and Thai food.”

As for dinner, she likes to eat it out too. “Dinner is my time to be social and catch up with people.”

After such information, it may seem that Emily doesn’t like cooking, but she claims the opposite. Because she thinks it’s important to keep an eye on where your food comes from and what’s in it.

“I cook a lot, so that really helps: You know how much salt and sugar and all of that kind of stuff you are putting in your body.”

What about cheat meals: “I think it’s good to indulge occasionally,” she said. “I definitely love a good cupcake sometimes,” her other favorite desserts include dark chocolate or pumpkin cheesecake.

Although she didn’t elaborate on exactly how much she tends to drink, part of her bedtime routine included “chugging water.”

Apart from nutrition young model also does some physical activity. Besides taking hikes with her friends, Emily also said she got bendy at a local yoga studio near on her days off, according to a 2016 interview with InStyle. “Doing yoga a couple of times a week is a really big part of my regimen,” she told ELLE.

“I don’t have a trainer, and I don’t really go to the gym,” Emily said in a 2015 interview with the New York Times. “I go on long walks and hikes with my girlfriends. That’s about it. I’m just not a crazy fitness person.”