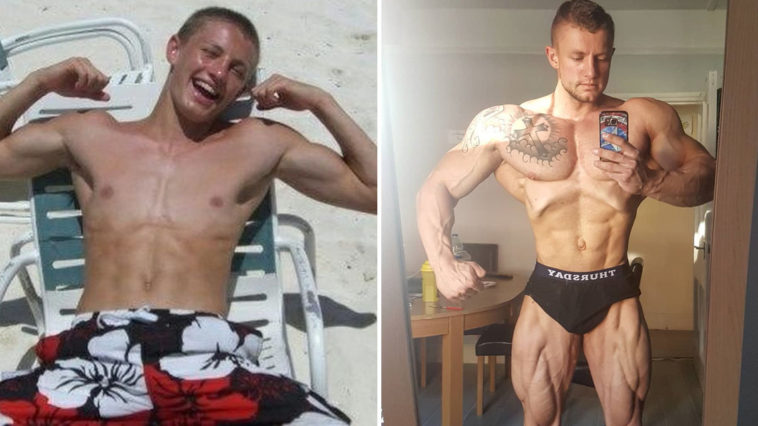 Guy Harding, 24, used to be a skinny banker until the day when fitness routine has drastically changed his appearance.

A guy of “man mountain” look says he “fell in love” with weights at the age of 16, and has worked tirelessly at creating his perfect body image.

The Mirror reports that seven years later, Guy’s incredible muscles dominate most of his time outside of work, with hours spent in the gym every single day.

The Lloyds Bank employee, from Devon, chows down on seven meals a day and even takes three lunch breaks while at work.

That’s three times the amount of food an average person his age would eat daily, and his gorging amounts to around 6,000 calories a day. He added: “I include two cheat meals a week which are normally pizza, burger or chips or a Chinese takeaway.”

But it’s not all about lunch breaks and eating right. Guy has worked hard in the gym, where he has been awarded 24 hour access, to achieve his goals.

Guy said: “I first got into bodybuilding at the age of 16 – this was going to the gym and picking up weights – the very basic. I fell in love and never looked back.”

“I started real hard dieting and training in 2014. This is when the real results started happening.”

Harding has entered and won professional bodybuilding competitions by showcasing his sculpted body and popping veins.

Guy, who lives with his girlfriend Cyprus, trains at the gym for two hours a day.

In an average session, he burns 600 calories during a weight session and 500 calories in an hour of cardio.

Despite achieving his ultimate muscles goals, Guy refrains from partaking in nearly all fun activities. It means he skips family meals, parties, holidays, and nights out with friends to maintain his “man mountain” look.

What about another part of his bodybuilding obsession – nutrition – according to the Mirror, everyday Harding eats 85g of oats, three whole eggs, and six egg whites for his first meal, followed by 180g of chicken or turkey and two whole wheat bagels for meal two and 180g of chicken or mincemeat, 200g of rice and spinach or broccoli for meal three.

Meal six constitutes 180g of chicken, 200g of sweet potato and vegetables and the final flourish – meal seven – consists of 100g of egg whites and two scoops of casein protein.