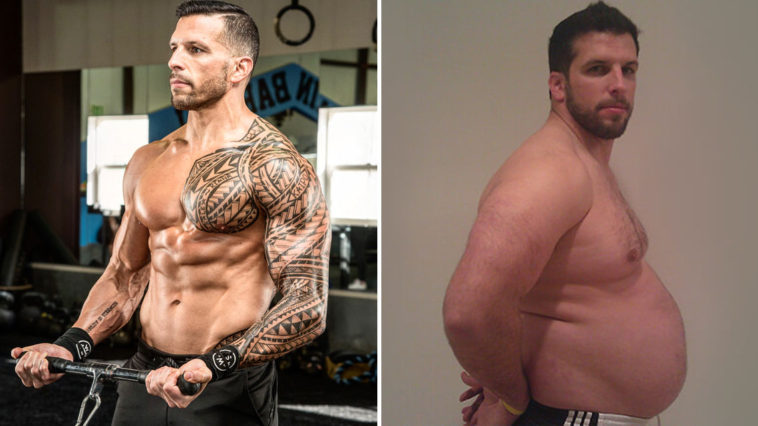 Working as a personal trainer Drew Manning from the USA was always an icon for his clients. He was fit, happily married, and an absolute athlete. Fitness was his life and always had been.

Being a true fan of his job Manning was able to recognise the shortcomings in his approach to training his clients. How could he, a physically fit and strong man, ever truly understand the struggles faced by his clients?

His body was neglected by himself he had never experienced what it was to be overweight. It was upon this realization, all the way back in 2011, that Manning’s fitness empire, Fat2Fit2Fat, was born.

As Australian MH reports, Drew set out on an experiment that would scare even the most daring of fitness professionals; he completely neglected his body for six months, forgoing training, eating high-fat meals, and gaining over 30kgs of fat in the process.

His six months journey from physical perfection to borderline obese went viral. These days, when it comes to body transformation videos, people tend to become insanely obsessed over those notions as everyone wants a slim and fit body. Perhaps, this could be the reason why they invest their money and time in gyms and train under the effective leadership of personal trainers (check out this page of Generation Fit for better reference). Coming back, documenting his journey on YouTube, Drew created a cult on his following, with a timelapse of his transformation closing in on half a million views.

“I gained over 70 lbs [30kgs] in 26 weeks and lost it all to have a better understanding, for me, what it was like to be overweight and hopefully inspire people to live healthier,” said Manning on YouTube. “Luckily, both of those things happened. I was humbled and learned the lessons I needed to and literally thousands of people all over the world joined me on the journey back to fit.”

After 26 weeks of the project without setting foot in a gym Drew made some significant changes.

He immediately cleaned up his diet, adopting a keto approach, and increased his physical activity in an effort to reverse the damage done during his experiment, although the come back was difficult at first. The keto diet is one of the most popular ways of losing weight these days, so it wasn’t surprising when Drew said he was using this method. It was suggested that Drew considered using some keto 6 supplements to aid this diet. Those sorts of supplements help people to enjoy more dietary freedom, whilst also helping the body to return to ketosis in a few hours. This helps people see the results of this diet much quicker. If anyone is currently using the keto diet, it might be worth looking into those sorts of supplements.

Talking to Good Morning America after his shred, Manning explained how the mental obstacles were just as humbling as the physical ones when returning to the gym.