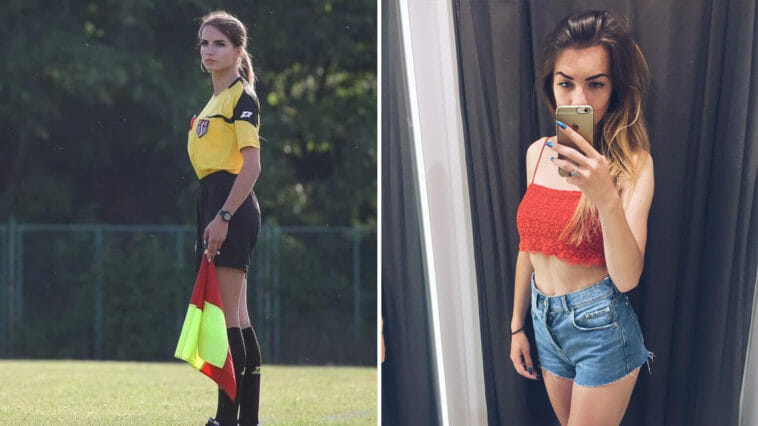 A few decades ago female referees in football were something out of the ordinary. But for today women-arbitrators “population” in this sport is growing more and more day-by-day, and some of them are just beauties.

Female judges started to be allowed to work with men’s teams almost from the beginning of the XXI century – first as side referees in games of substitution teams and lower leagues, then in elite divisions, in European cups, and in national teams.

Today women are appointed for the men’s matches as the chief judges. What’s more, the appearance of the girls-arbitrators has changed as well. If the elder generation is mostly severe Frau at the age, who dedicated to football half of their lives. Now real beauties and even just models tend to start referee career maybe only for the sake of fame and popularity.

Fernanda Colombo is a 26-year-old Brazilian. Officially, Fernanda Colombo became a FIFA arbitrator only a few years ago. Since 2014, the ex-model officially serves meetings of the Serie A football teams in her home country as a side referee. Local journalists nicknamed the blonde as “The Brazilian miracle.”

But, despite the fascinating appearance, there are mistakes in her work. In her the very first match (Atletico Mineiro and Cruzeiro played then), the Brazilian made a gross error: she fixed the offside at the last minute – at the moment when the players of Cruzeiro could equalize the score. Although, as it turned out later, there was no position outside the game.

After that match, the girl was advised to act in adult male magazines, instead of judging football games.

Despite the fact that the judicial career of Fernanda is developing rapidly, the girl did not abandon the model world. Fernanda is also successful in this direction. The boundaries of her demand have expanded thanks to football and her recognition.

Claudia Romani is a model, which was included in the list of the ten most beautiful women in Italy. She passed all the necessary exams and was given the right to judge the matches of the Italian championship.

The girl is also a passionate Milan fan and often takes photos in the form of a favourite club. The model came up with an original way to celebrate the victories of the Italian team. She writes a score of the match on the mirror or her body and takes herself in a frank way.

Besides, Claudia is the ambassador of Milan to the United States. She admits that she had been in love with the club since her childhood, and her grandfather had taught her all she knows about football team history.

20-year-old girl names herself as a football referee, runner and law student from Kraków, Poland.

Karolina serves the matches of the lower leagues in the Małopolska voivodship, but thanks to her beauty she has gained worldwide fame.

Karolina took her love for refereeing from her grandfather, who worked as a football referee for many years. Studying at the Jagiellonian University, Bojar decided to go to the judges’ courses and was the only woman there.