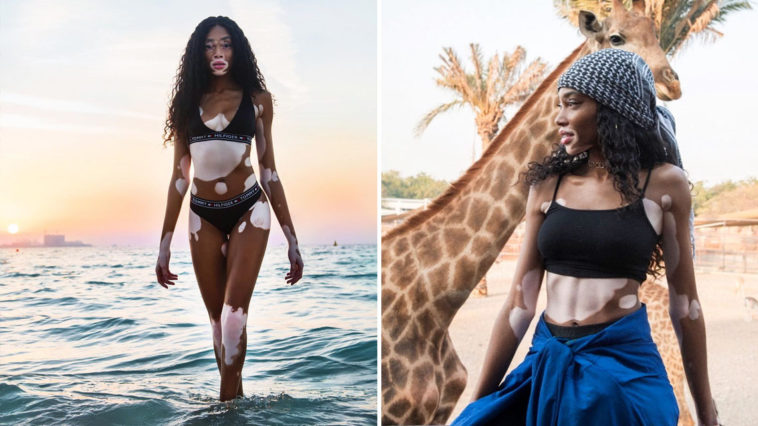 The Canadian model Winnie Harlow – real name Chantelle Brown-Young, is famous for becoming a top model despite having a skin condition called vitiligo.

Vitiligo is a long-term skin condition characterized by patches of the skin losing their pigment. About 1% of the world’s population is suffering from this skin disease. But our today’s hero has proved that all bounds exist only in our heads.

Canadian fashion model, spokesperson, and activist gained prominence as a contestant on the twenty-first cycle of the U.S. television series America’s Next Top Model.

Winnie Harlow was born on July 27, 1994, in Toronto, Ontario, the daughter of Lisa Brown and Windsor Young. She is of Jamaican ancestry and has two sisters.

She was diagnosed with the chronic skin condition, at the age of four. Harlow was a victim of bullying by other children and was reportedly called a “cow, zebra, and all manner of other disparaging slurs” throughout her childhood. The verbal harassment led to her changing schools numerous times and dropping out of high school, after which she contemplated committing suicide.

Worth the Risk ❤️

Her opening as a model became real due to America’s Next Top Model host Tyra Banks, who posted Winnie’s photo on Instagram. Subsequently, Harlow became one of the fourteen finalists of the twenty-first season of the television show, in 2014. It was a breakthrough for her as Harlow became rich.

After leaving the show (she eventually took 6th place), Harlow was shot for the Spanish clothing brand Desigual and became the official representative of the brand.

She also posed for fashion magazines such as i-D and Dazed, and the site Showstudio.com. In 2015, Harlow was shot for the Italian brand of clothing Diesel for the spring-summer collection of 2015. The session was filmed by British fashion photographer Nick Knight, she starred for the Spanish and Italian edition of the magazine Glamor and appeared in the issue of the magazine Complex in August / September 2015.

In August 2015, she starred for the release of Cosmopolitan, then for the Vogue Italia website, for which she gave interviews. In the same month, she appeared on the cover of Ebony magazine. In 2016 Harlow starred in advertising Sprite.

To add, Harlow’s recognition spread above the modeling borders as she has appeared in multiple music videos, including JMSN’s “The One”, Eminem’s “Guts Over Fear”, and The Black Eyed Peas’ “#WHERESTHELOVE”. She was one of many notable cameos in Beyoncé’s “visual album” Lemonade.

“My true uniqueness is not hidden in my skin. It consists in the fact that I do not try to seek confirmation of my beauty from the people around me. I am beautiful because I think so. Enjoy your uniqueness and unique beauty today and every day, ” says the model.

“I feel like I am an inspiration. That’s the word I prefer,” she explained.

Well, she’s undoubtedly inspiring us to love our bodies today.

Addiction to Love… but you deserve more than you know ?