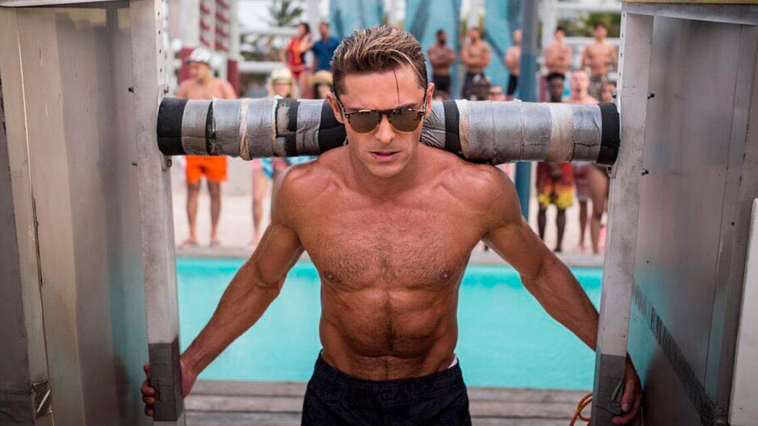 Zac Efron is one of the fittest male celebrities and he has spent years bulking up with a grueling workout routine. Proving that his hard work is paying off, the actor regularly tackles ninja warrior courses, jumping from rope to rope, lifting tyres and completing non-stop pull-ups on the beaches of California, in addition to hours spent in the gym each day.

Zac Efron may have been blessed with undeniably good genetics, but make no mistake: The lean physique he showcases in Baywatch has been earned.

The average preparation time for Hollywood training usually lands somewhere around four to six weeks, but Efron started the work eight months before the cameras were on.

“I have been training actors for 20 years and I have never seen anything quite like his work ethic,” says Efron’s trainer Patrick Murphy. “He was crushing two sessions a day, doing lifeguard courses, and then going on 20-mile bike rides. There is a laser focus he has about his training. On top of that, I never once heard him groan about doing another rep.”

“Patrick’s training was confusing at first,” Efron says. “He pushed me to my limits with a very multifaceted style: strength, explosiveness, fast-paced, calculated, diverse, and gut-wrenching workouts. It was fun … you never know what he’s going to throw at you the next day.”

In terms of nutrition, he follows a strict diet, including several nine day detox cures in which sugar and carbohydrates are off limits, to be replaced by as many organic vegetables and lean proteins as he likes. 12 weeks of training later, the result is a sharply toned silhouette with rock hard abs and pecs and little over 5% body fat – the average is somewhere between 15% and 30%.

A quick glimpse into the life of a fitness fanatic, via his Instagram.

The last lifeguard is wrapped 😉 #Baywatch

Special delivery for The Rock #Baywatch

Honestly I have a hard time with paparazzi but s/o to this dude ?

Back and bi's #baywatch