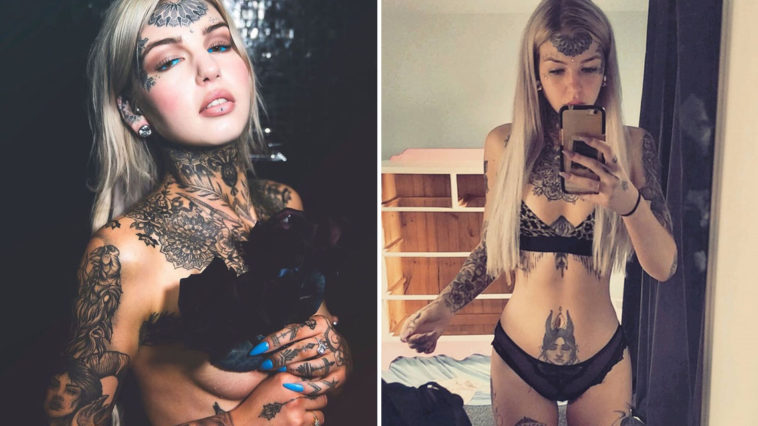 Amber Luke, 23, has totally changed the way she looks now compared to her 16-year-old self after she went under the needle more than 50 times.

The Australian has even decided on some body modifications, including getting her eyeballs tattooed blue and splitting her tongue down the middle.

When talking about her motives, Amber says she hated the way she used to look – describing herself as “boring”.

Speaking to Daily Mail Australia, she said: “I see myself as very plain looking when looking at before, and after photos, I absolutely hated the way I used to look. I was boring.”

“As soon as I turned 16, I was inspired by those around me to get tattooed. I craved to know what the feeling was like.”

“I developed an addiction at 16 years of age. By the time I hit 18, I already had three tattoos. And when I turned 18, I decided to get my first big piece.”

Today, Luke has tattoos all over her body including her bum and forehead.

She regularly shows off her winnings to her more than 51,000 Instagram followers who have praised her transformation.

Moreover, she explained the meaning behind her nickname: “I got the name “Blue Eyes White Dragon” from my friends, they call me that because I resemble a dragon with my eyes and tongue.”

As you know, it is quite the risk going permanently blind after getting eyeballs tattooed.

“The procedure for getting my eyes done was only 40 minutes,” she said.

“It was very intense and very painful. My eyes got held open while a syringe was injected into my eye four times per eye. I was blind for three weeks.”

According to Daily Mail, Amber’s inspiration stemmed from Australian man Ethan Bramble, 21, who calls himself the “world’s most modified youth”, after he got more than 40 body modification procedures.

“I’m absolutely in love with my image,” she ended.