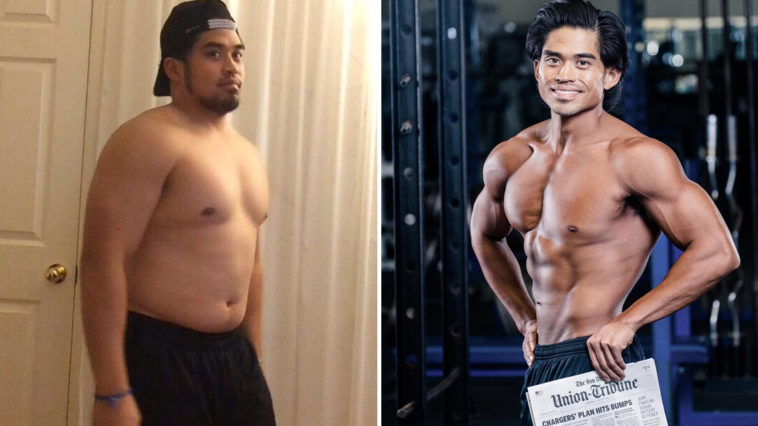 Patrick Magno, from San Diego, California, was 30 percent body fat while totally unhappy with his appearance.

But after a health scare, when the doctor told him that he was at risk of developing diabetes, the 31-year-old was shocked into changing his life and losing an incredible 49lb (from 180.6lb (12st 9lb) down to 134lb (9st 6lb)) in just three months.

Two weeks after his doctor’s warning, feeling “burnt out and unhappy” Patrick finished his last day of work and proposed to his girlfriend of six years at a family reunion.

He was ready to start the next chapter in life, saying: “I had to do better for my fiancé.”

According to the Daily Mail, much of the spur to change was his own appearance. “I couldn’t even recognise myself,” he said. “I was embarrassed. I was disgusted. I was ashamed that I had let myself get to this point.”

Fortunately, soon Patrick heard about Bodybuilding.com’s 250k Challenge. It required entrants to transform their figures with supplements, meal plans, workouts like stim-free preworkouts, for example, and any health tips they could find for themselves, and the contestant with the most jaw-dropping makeover is awarded a substantial prize.

Patrick revealed: “I heard about the transformation challenge and, to be honest, at first I was sceptical of what the site claimed to offer.”

“They said they would give tons of nutritional meal plans, options, workout guides and fitness advice absolutely free of charge, and offer a $250,000 ( £190,000) in prize money. It sounded a little too good to be true.”

By week five, almost halfway, Patrick says he was feeling: “Tired, sore, alive, motivated, determined. The more results I saw, the harder I pushed. The harder I pushed, the better I became.” Many people going through a similar process look into supplements, such as power life and many more, to give themselves more energy to help them stay determined.

To be 100% honest, this was a weird experience for me. I've never "prepped" for a competition or photoshoot of any kind. I didn't know how much carbs, water, salt, protein I was "supposed" to be having leading up to taking my after photos. I looked up a guide to getting competition stage-ready and tried my best to follow the plan. I even shaved and got a spray tan…Don't judge, hah! I tried to avoid drinking water right before the photos but at the end of the day, I knew that all hours I spent in the gym and all the times I passed up the junk food was what really prepared me for my final photos. I had worked so hard for this over those 12 weeks and wanted to showcase the final results as best I could. Never in a million years did I think I would finish this strong, look this great, feel this amazing and have the confidence I have today! Thank you @bodybuildingcom and @dymatize for putting on this challenge and thanks to those who encouraged me to push through.

Magno’s efforts weren’t in vain as his determination was rewarded. He was crowned the 2016 Bodybuilding.com male 250k transformation winner.

He is now carrying 24 percent less body fat, has lowered his risk of diabetes significantly, and has bagged $100,000 of prize money. There is so much risk that comes along with diabetes, so to manage something like this should be commended as some people may only know the surface of what diabetes can do to someone, For instance, they might not be aware that diabetes has the potential to cause nearsightedness, and Atropine eye drops, which websites like Central Drug has information on, can help slow that progression, however, it cannot cure it.

I remember taking this picture and knowing that no matter the outcome, I was a winner!! I won! I overcame my fears, obstacles and dropped over 50 pounds doing it. I accomplished my goals and I never quit. #250kchallenge

He said: “I’ve been able to lift a lot heavier in the gym and my nutrition has been on track so far.”

“I remember feeling miserable when I took my “before” photos. My belly was hanging over my pants. It didn’t help that I had been eating and drinking way more than necessary.”

He admits that money prize always comes in the second place when you realise that “getting my health back is the ultimate prize.”

This is how I feel about finishing the challenge! #250kchallenge #NeverLookBack

Never look back…unless you're trying to see those muscles you've been working so hard for! #250kchallenge #BestAndHardest12WeeksOfMyLife

Flash back Friday to the year that changed my life and had me screaming “Anything is POSSIBLE!” like Kevin Garnett. ?? There’s only 10 days left to register for the $250kchallenge2018!! What do you have to lose? Take your shot at winning some cash & change your life. ??