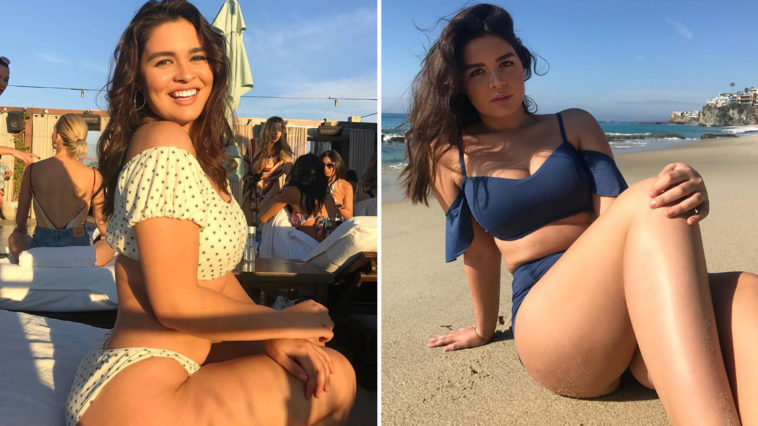 “I had been following her for a while, and she posted something about body positivity, so I just commented something like ‘you look great girl’,” Bella explains to Cosmopolitan.

After that, she was noticed by a modeling scout asking to meet with her. “My profile was private, but she followed me and then direct messaged me the next day asking if I was interested in modeling,” Bella recalls.

“I really thought it was a scam at first because unless watching a lot of America’s Next Top Model counts, I had never done any modeling before.”

At the time Bella was working at Disneyland in California as a character performer.

“When people found out I worked at Disneyland they would always ask me if I was a Princess, but I wasn’t,” she said. “I was the one dressed in a full-on animal suit completely sweating.”

Not really enjoying her position the girl actually had some important lessons that have helped her to achieve the job of her dreams. “[It’s] kind of funny when I think back because I guess I’ve been posing for pictures longer than I realized,” a bemused Bella explains.

“I’ve always been the motherly type in my friend group and told everybody else not to worry about things and be who they want to be, so for once I just took my own advice,” the brunette beauty said.

Bella also talks about the rest features that have helped her. “Social media has also helped me feel better about myself by forcing me to step out of my comfort zone and post things that I would appreciate to see other people posting. I want any 14-year-old girl who follows me to feel comfortable in her body, so I purposefully go outside of my own comfort zone to show them a different body shape on a regular beach, rather than the ‘perfect body’ on a yacht somewhere.”

Despite her healthy size 12 considered as a plus-size model California-native explains her thoughts on this part of modeling business: “People ask me ‘how are you plus-size?’, or ‘it’s terrible you’re considered plus-size’, but I don’t take it as a bad thing. In fashion if you’re over a size 4 (UK size 8), you’re considered plus-size, that’s the crazy thing. I’m a size 12 (UK size 16), but when I’m shopping online I realize from looking at the size guides and measurements, I never fit in one box.”

“Although I don’t have a problem being labelled as plus-size, I do think the term is problematic in a sense because I don’t like the idea of separation, that one group of people is superior to another.”

Like the majority children that look different from their peers our today’s heroine was bullied at school: “I always felt kind of uncomfortable in my body when I was growing up, and it wasn’t because I was naturally curvy, it was because I was really tall and kind of awkward. I was bullied in middle school because of it, and it really affected my confidence. Then at 13 I went into puberty straight away, and boys just started sexualizing me for having hips, so for a really long time I was just dressing to cover myself up.”

Soon there will be her career take off, so now she can proudly say that all of that cruel children were mistaken about her. Even though she didn’t plan it this way, it’s safe to say that she got the ultimate revenge!