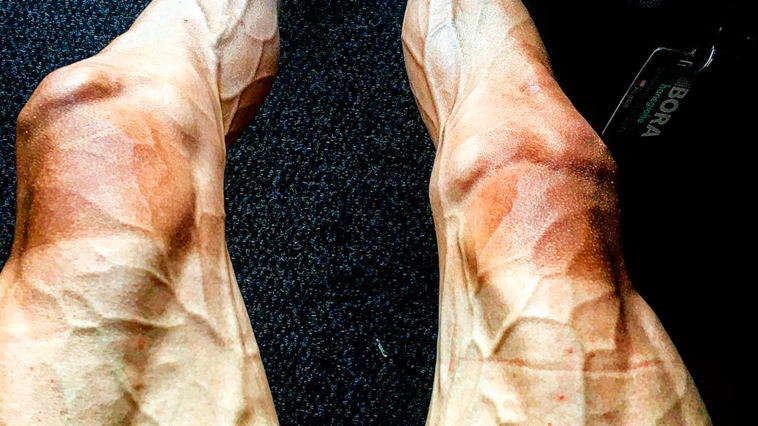 27-year-old Polish cyclist Pawel Poljanski (Bora-Hansgrohe team) shared what his legs look like after 16 stages of the famous cycling event.

That’s about 68 hours of pedaling before things wrap up in Paris on Sunday.

Here’s what Poljanski’s legs looked like earlier in the month.

It’s not the first time riders have posted the effects of the race, with Chris Froome of Team Sky sharing his veiny pins in 2014.

Dr Bradley Launikonis from the University of Queensland’s School of Biomedical Science told ABC that elite cyclists will experience significantly higher blood flow to their legs compared to the average person.

“The amount of blood that we get normally going down to our legs is five litres per minute, for anyone at rest. For an untrained athlete, their maximum exercise will have 20 litres per minute flowing through the muscles.

“One of these elite cyclists will have double that, about 40 litres per minute. They have massive volumes of blood moving through.”

But surely the effort is over and blood flow will therefore return to normal? Not so, according to Launikonis.

“After he’s finished exercising, the veins are showing up. Blood flow is pressurised through the arteries in a highly regulated fashion.

“What we’re seeing are the veins, and there’s a lot less pressure in them. There’s a high level of blood being pushed into his legs for long periods of time, and it’s still in there post-exercise.

“It’s not going to happen to someone who’s doing recreational exercise. It’s clearly something that’s only going to happen in elite athletes, like these guys riding in massive cycling events.”