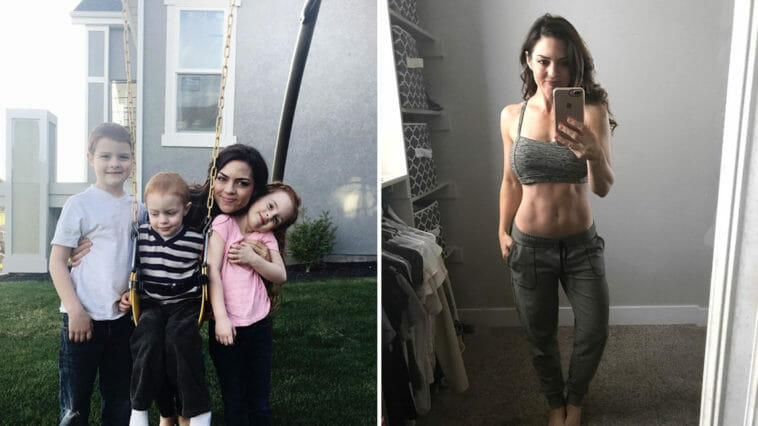 The mother of seven children proudly demonstrated her fantastic body and revealed the secrets of her youth, thanks to which her 22-year-old daughter is often mistaken for her sister.

Now the 43-year-old, Jessica Enslow, from Utah, claims today she is in better shape than she had in her youth.

She gave birth to her first child in 1994 when she was 19 years old. Soon, in 1996, Jessica became a mother the second time, at the age of 21. Over the next 19 years, she welcomed the birth of five more children and remarried once again. The youngest child in the family was born in 2013.

The first elder four children are from the first marriage, the other three – from the second one.

Jessica can boast of her youthful appearance because of which she is given the same number of years as her adult children. Whenever Enslow posts photos to social networks, accompanied by her 22-year-old daughter Alyssa, subscribers on the Instagram note that the two women, rather, look like sisters and not as a mother and daughter.

After gaining such a significant amount of followers, Jessica is forced to answer the most crucial question in her life again and again: how does she manage to remain so charming when it is necessary to look after her large family?

Enslow acknowledges that she did not understand how quickly she gained weight during her first pregnancy. She was sure that she would immediately return to her “normal size” and clothes that she was accustomed to after she gave birth.

“I literally got home from the hospital and immediately put on my pre-pregnancy jeans only to find they wouldn’t go any farther than mid-thigh,” she shared.

“This is when extreme fear and a little depression set in.”

Talking about how did she became slimmer and transformed physically, Jessica explains that having a husband and elder children who support her was crucial to her success.

Being a busy mom, Enslow had to learn how to build in work out sessions in her daily routines. Before starting a radical fitness program in 2017, mother-of-seven was eating chocolate pasta every day and was occasionally practicing, sometimes dropping in for advice to the Pinterest social network.

“I used to eat Nutella by the spoonful, and on my toast and my bananas,” she told.

“That’s when things started getting really out of hand with my body composition and finally prompted me to change my daily habits.”

Currently, American attends the gym three times a week while her children are at school, and every Monday wakes up early in the morning to do her traditional cardio training. “You do what you can!” is Jessica’s the most favourite adage.

It's back day! And here are two of my favorite exercises to get a beautifully toned back ❤️ Do 3 sets of 6-10 of each ? #workoutvideo #backday #backdayworkout #jessicaenslowworkout

When it comes to the way she eats, Enslow explains that her idea is to eat ‘intuitively’ as she prefers not to carefully monitor how much calories were absorbed and how many nutrients the body has ingested.

Her go-to carbs include:

“Just stay consistent,” says the mother. “But, even if you fail, just ignore that and try to get back to where you left off.”