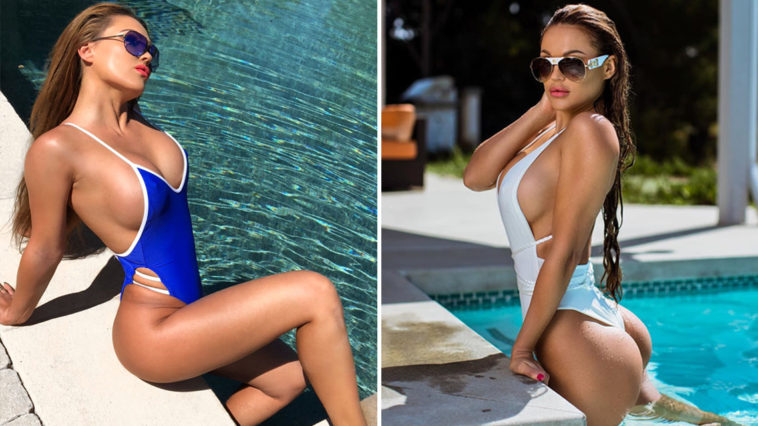 Julia Gilas’ road to the dream started in rather severe conditions. Born in 1985, Ukraine, which then was a part of Soviet Union she dreamed of moving away from her home country.

Julia said, there were times where the cold would be unbearable, and the lack of internet and common services in the country weren’t available, which only gave her more motivation to follow her dreams of success.

“Life wasn’t easy in Ukraine. The winters were extremely cold with a lot of snow, and the summers were the complete opposite with high heat and humidity. Our family didn’t have money, so I just played in the streets, rode my bicycle, and hung out with friends in the neighborhood,” Greatest Physiques cites her words.

In order to see the world and create a better life for herself, Julia decided to become a model.
“Starting from a very early age, I knew there had to be more. As I began to dream more, the desire to leave my city in Ukraine burned inside of me.”

“Growing up, I became fortunate enough to become a model and start traveling. My modeling work in Europe gave me the opportunity to travel and see much more of the world. I believe education comes in many forms beyond school and books, and my education came from my traveling the world and learning from others I met along the way.”

Constant trips from one country to another had a rather bad impact on health Gilas’ health. Year by year her busyness grew. Now she was less able to make healthy food choices and workout to keep herself strong and active.

What if there was a magic way to get the body you want without going to a gym or using equipment. There is! Okay, it’s not magic, but my bodyweight training program can give you the bikini body you want in without even leaving your house. Download it at the link in my bio. #nomagicpill #nogymequipment #nomissedworkouts #homeworkout #noexcuses #nogym #nevermissworkouts #beachbody #girlswholift #bikinibody #bodyweightworkout #fitness #fitnessgoals #fitgoals #bodygoals

Fortunately, Julia made this fact as a turning point between modelling and becoming a true fitness star. “As I got older, I began to realize that modeling was grueling, and my health was beginning to suffer because of it. Many of the models around me looked great on the outside, but they were unhealthy because of the lifestyle. I’d see them eating junk food and drinking multiple energy drinks throughout the day to keep going, and this would go on day after day. I started researching and reading up on how to become truly healthy.”

She has dived into fitness to expand her horizons.

One of my fav body parts to workout it's my hamstrings. How about you? @handlzgloves

Soon in 2009, she moved to the USA to bring her fitness career to the next level. Since then, she’s gained US Citizenship and settled down in the Land of Opportunity.

Her example teaches us that you should never be afraid of changing things around you. No one knows what would happen but trying just worth it.

Life isn't about waiting for the storm to pass…It's about learning to dance in the rain. #takinginthebeautyofanevening

“Now my days are busy with healthy living, and my typical day starts at around 6 a.m. When I’m not at photo shoots, taking pictures, working out, or doing any of the other typical daily things that come up in life, I like to enjoy quiet time to myself. I have a pet squirrel, a dog, and a cat who keep me company. When I have downtime, I like to watch good movies.”

Just because summer’s coming to an end doesn’t mean it’s time to slack off on the exercise. If you want a good body next summer, it’s much easier if you stay fit all year. Make it easy to exercise all year with my bodyweight exercise program at the link in my bio. #underconstruction #yearroundbody #allseasonbody #nogymrequired #noequipment #bodygoals #dreambody #figure #figuregoals #bikinigoals #bodyweightworkout #juliagilas #exerciseathome

Guess how many tattoos do I have? ? BTW I would love to hear all of yours options about tattoo, good or bad? Do you have one? P.S. Don't be shy, I am reading all my comments and trying my best to reply everyone ? ?by @playmodephoto ♐️geniushoroscope ♐️ @centarheruvim

Miss your deadline to get in shape by summer? It’s never too late, and there’s still plenty of summer left. You can get in great shape in just six weeks with my bodyweight program at the link in my bio. #summerbody #bikinitime #figure#bikinibody #fitgoals #fitnessgoals #bodygoals #abs #getabs #physique #beachbody #bodyshaping #bikiniweather #6weekworkout #newbody

Today is Friday ❤️ I wish you all wonderful weekend ? @bluelineefex ?@kristenlonie

Question to all men… What is "perfect" woman should be like? ??‍♀️Tell us please! Me and my girls followers are going to read all of your comments! This is very interesting ?

Having a personal trainer to help you get a great beach body makes it easier but can be expensive and inconvenient. With my bodyweight training program, I can help you train anywhere and anytime, even at home. Get my program at the link in my bio #personaltrainer #trainathome #exerciseathome #getinshape #beachbody #6weekworkout #sixweekworkout #betterbody #bodygoals #athomeworkout #bodyweightworkout #officeworkout #vacationworkout