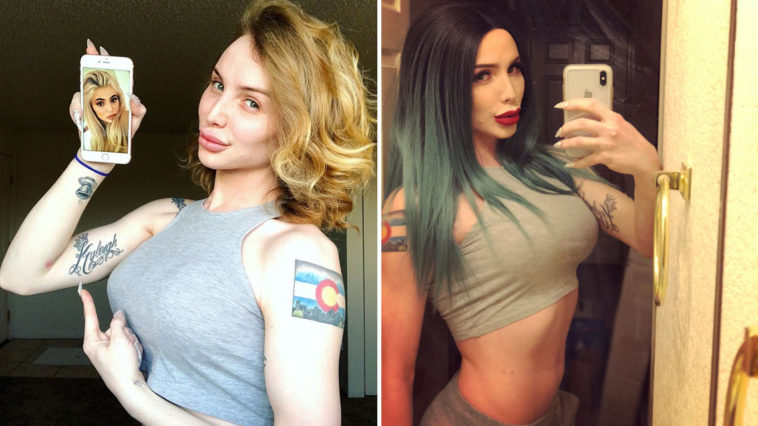 Feeling like an ‘outcast’ and ‘ugly duckling’ who didn’t fit in, while growing up, Kyleigh was inspired by the transformation of Kylie Jenner.

A transgender woman, Kyleigh Potts, 23, from Denver, Colorado, started with lip-fillers three-years-ago and has now had over 40 procedures, regularly topping-up every three months, what has already cost about $75,000 (£50,000) to her.

To further emulate the reality TV star, she decided to turn her hormone-grown A cup breasts into 34DDDs, withstood work on her nose and had a chin implant three months ago.

During her transition under surgery knife, she won’t be ‘put in a box’ and maintains she will keep her male genitalia as she is comfortable living as gender non-conforming.

She believes that even her former name (being a boy she was named Kyle Leigh) is very similar to her idol’s one Kylie Jenner.

An aspiring woman says: “I have spent the last four years perfecting my transition into the beautiful woman I always knew I was.” – The Daily Mail cites her words.

“Kylie Jenner has always been my ultimate goal and inspiration, I feel like I have always emulated her and like her, I didn’t start out beautiful, I built myself beautiful. When I saw her come into herself and transform from the ugly duckling to the b**** everybody wants to be – every girl wants to be her, and every guy wants to sleep with her.”

“I resonated with that, I always thought I was unattractive, ugly and never enough through the trauma of being bullied that I found confidence through altering myself. I turned to dermal fillers in attempts to make everything better, I spent my first two years doing that extensively to the point where my lips were huge.”

“Then I wanted to change my appearance, I felt like a man but who I was on the inside didn’t match my physical appearance and how I appear to everyone else. My facial structure is very similar to hers, when I had my recent surgeries, they asked me to bring in pictures of my inspiration and desired look, every image was of Kylie Jenner.”

“I found Dolly Parton’s plastic surgeon, because I wanted the biggest breasts possible, to feminise my face by making my chin more rounded and alter my nose to look like Kylie’s. I went from no breasts at all, only developing small tissue from hormones to 650cc implants that have given me 34DDD breasts.”

“People tell me I look like Kylie Jenner a lot, it was always a joke among my friends, and I refer to myself as King Kyleigh, I even have it tattooed on my biceps. Whenever I go grocery shopping everyone’s heads turn that happens no matter what, I don’t pay a lot of attention to it – I’m used to walking into somewhere and having the whole room staring at me.”

Kyleigh added: “Unlike most transgender women, I am proud of the fact that I have male genitalia, I never wish to change them. My doctors tailor my hormones, so there is a high-enough testosterone level to allow me to still use my male genitalia during sex. I have no plans to remove them, there are too many constraints on gender where people believe they have to choose male or female.”

“Plastic surgery will not cure any psychological problems – I want to encourage people who need it to seek the right help.” – ends Kyleigh.