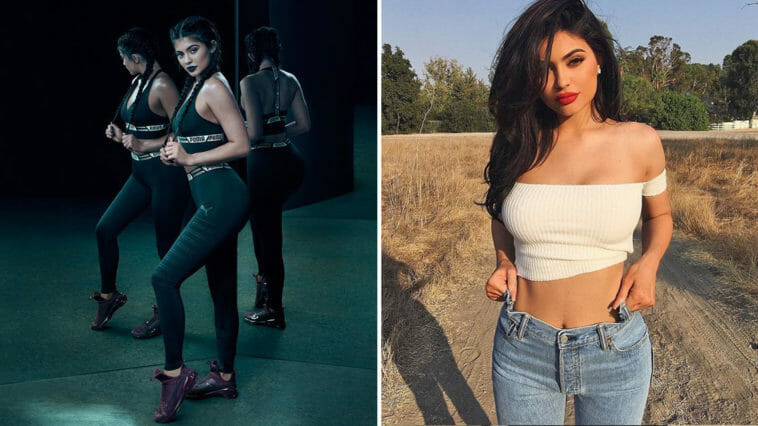 Here we’ll try to find out if it is possible to remain fit while doing nothing or you just have to be more blessed than others.

Kylie is the titan of Instagram with her 100 million subscribers. And consequently, the most popular question her photos beg is: What is she doing to get so fit?!

Kylie honestly affirmed on Snapchat that she doesn’t like working out, adding to this, she’s always eating whatever she wants – from french fries to burgers and bacon.

always bring your own tacos ?

However, over the last few years, she tried to start eating healthier.

Besides, she lost weight after finding out she’s lactose intolerant, she told E! News. Thus, Jenner said she’s been focused on cutting dairy from her diet and drinking pressed juices, which have helped her slim down.

Even her sisters Khloe Kardashian-who works out daily and Kim Kardashian admit Kylie isn’t fitness babe. “Kylie doesn’t really work out,” Khloe wrote. “She did come with Kourt and me one time when Don was training us. Don does four quarters in each session, and Kylie only stayed for one quarter.”

That’s where the most significant question appears: If she doesn’t work out, how does she look so toned?

Most of us could think about plastic surgeries, but Kylie vigorously denies those rumors. Some people have even suggested that she’s had a nonsurgical treatment like chin injections, which is another type of cosmetic procedure that is rapidly growing in popularity (source from VCI). Instead, she credits contouring and right angles. “I swear there are things you can do to work on problem areas without having to think about plastic surgery,” she wrote once, adding, “Contouring has changed my life!”

After what she continues to deny having breast implants. “No, people-I haven’t gotten breast implants,” she said. “Everyone is obsessed with that. The truth is, as I’ve gotten older, I’ve gained 15 pounds, and my body has changed; I’ve definitely filled out.” Some people act like getting breast implants is a bad thing. Even if this is what Kylie decided to do, I’m sure she would use the best surgeons around, one similar to Dr. Shridharani, who has years of experience in performing breast augmentation procedures. So either way, anyone who is so concerned about this part of her life would have nothing to worry about.

InStyle also gives us her “repentance”: “They’re not big,” she said of her boobs. “I’ve thought about [getting breast implants], but I’m like, why ruin it? I have really good boobs naturally, and they’re a cute little size. I’m not against it, but right now, it’s a no from me.”

Not everyone is as naturally endowed with the same physical attributes as Kylie is, but there are places that people can go to have some cosmetic adjustments done to their bodies in order to achieve their beauty goals. Denver Breast implants are one such option that many women consider. Nobody’s saying that you have to have large breasts to be beautiful but it’s just a preference that some women have and, if they choose to act on it, that’s up to them.

Concerning her butt Kylie also had to say something: “I used to be 120 [lbs]. I was like 16, I was really skinny… Now I’m pushing like 136 [lbs]…but it’s alright, I like the chunkiness,” she said promising to have no butt implants either.

Looking back at Turks