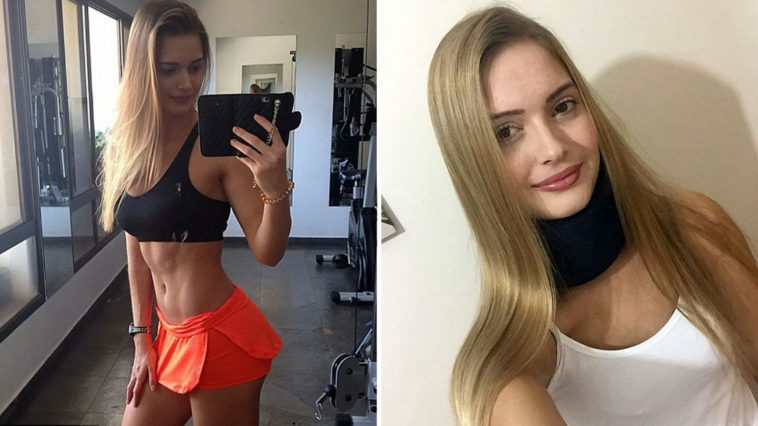 The 23-year-old fitness model from Brazil, Marcelle Mancuso, was paralysed below the neck after falling on the head during a workout in the gym.

But after several months of exhausting physiotherapy, she managed to regain the ability to move. Now the girl returned to the gym – and does the exercises again.

In January 2016, Marcelle Mancuso broke the cervical vertebrae, slipping off the bench during the core exercise.

It was just another normal day of training,” Mancuso said.

“I went to perform the abdominal inverted sit-up, and was upside down.” “I was attached to the equipment with a strip, which broke and the personal trainer could not hold me.”

“My diagnosis was tetraplegia – no movement in my arms or legs,” she explained. “The doctors did not know if I would walk again or if I would stay in a bed forever.”

And although the doctors installed a titanium plate with six screws on the spine of Marcelle, they did not know if the girl would ever move or forever remain bedridden.

Marcelle decided not to give up and began to try to move her toes after a few days, a week later – get up, and a month later – walk with a stick.

“After four months I started to improve my leg strength and five months after the accident I stopped having fainting and dizziness while walking,” she said.

“After six months I managed to walk, and my legs did not sway anymore.”

Now the girl has returned to the gym and says that she is more active than ever before.

“It sometimes feels like it was a nightmare I have woken from,” she said.

“I have a normal life today and thank God all the time for it! I learned to value the simplest things in life, such as getting out of bed and being able to brush my teeth without help.”