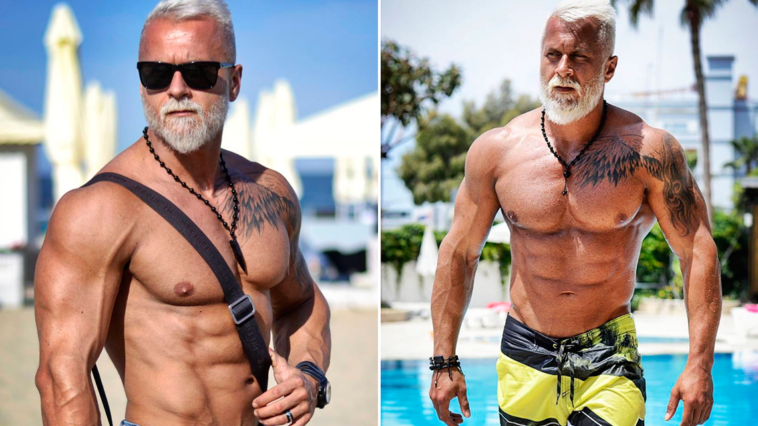 Pawel Ladziak is the silver-haired, buff-bodied, “Polish Viking” currently blowing up Instagram with his oh-so-steamy posts.

Many spend thousands in a bid to appear more youthful looking, and to stave of the effects of aging. For one man, though, the end game of his image is an altogether different prospect. Pawel, a 35-year-old Polish fitness fanatic, is causing a sensation on Instagram by intentionally aging himself. His goal: to look as muscular and as old as he possibly can.

It seems that the well toned older man look has gone down extremely well on Instagram, and Ladziak believes that, by making himself look older than other fitness models, he sets himself apart from the crowd.

It would seem that Pavel Ladziak’s hair started going grey at a relatively early age and, dissatisfied with the “salt and pepper” look, he decided that he would preempt the whole process and dye it all white. The decision appears to have paid off.

To continue to promote this misconception, Ladziak reportedly spends a considerable amount of money trying to appear much older than his natural age, despite his honed physique.

Ladziak is often compared to Gianluca Vacchi, the Italian businessman who found fame last year after being dubbed a fit older man. Vacchi, though, is considerably older than Ladziak.

Perhaps you’d do the same if that came with 407K Instagram followers. “I still can remember where I started and where I am now. I’ll never surrender because I don’t want go back! Let’s stick together team and make a deal: I motivate you and you motivate me!”