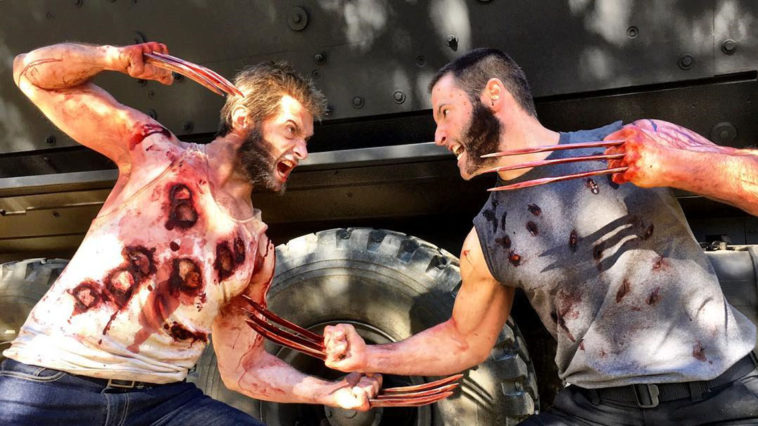 Eddie Davenport is a stunt double for Jackman, paid to do the dangerous tricks and take the body blows that the Hollywood star doesn’t fancy.

The stuntman appeared in blockbuster films like Logan and Real Steel, which obligated him to go through months of training and dieting to build up his body.

Some people still consider it as a joke when they hear that Eddie some time before was too self-conscious of his body to pose for photos and was bullied in school because of his weight. Considering how muscular Eddie is now it is hardly imagined to be the truth.

Prior to taking up exercising his diet consisted mostly of products like “whatever was cheapest” and despite the fact, his wasn’t obese, Davenport was often called fat in school.

According to Unilad, at college, he found inspiration in a book called Body For Life and decided to fully commit himself to the diet and exercise programme he found within.

“Fat kid’s” dream job was becoming an action star, which inspired Eddie to learn basic stunt moves while working at a dinner show in Orlando and shortly after in California too. There were the exact time and place to meet people who worked in Hollywood who delivered Eddie some harsh realities.

“I met with agents, and they asked me what I wanted to do, and I said I wanted to be in action movies,” he told Men’s Health.

“They literally asked me to lift up my shirt, saw my stomach, and told me I wouldn’t make it because I was just average. I was just skinny; I wasn’t muscular.”

This, of course, gave Eddie the fuel he needed, and so he hit the gym hard and educated himself on what to eat.

His big break happened with Real Steel as Jackman’s stunt double for the first time ever. Soon propositions to star as an action actor just snowballed from there.

His preparation for Logan was the toughest. Reportedly from MH, Eddie worked out six days a week splitting the time between cardio and strength training.

He added: “Windsprints are the best, especially if you’re trying to shred up and lean out. They make you feel like you’re going to die, but they really work.”

Moreover, the double model had to forget about his cheat days and started using intermittent fasting as a way to lose weight quicker.

Eddie admits that it wasn’t too bad though as he knew he was doing it for the right reason saying: “I’ll go crazy for frozen yogurt, but my body is so used to eating clean that it kind of rejects anything that is outside of my diet.”

“People always ask me why I’m so strict about my diet and working out. In this industry, how I look is really the only thing I have any control over.”

For those whose dreams are about becoming an action hero or who just wants to make a significant lifestyle change like he did Eddie has some advice: “It’s all about your mindset. You need to figure out exactly what it is you want it to be and always keep that in your mind. And remember that the process takes time, so don’t get discouraged when you aren’t seeing any results.”

“Just trust the process and stick to it.”