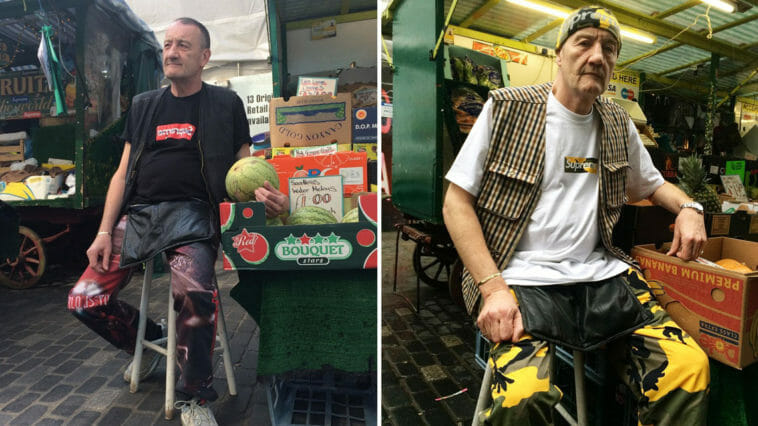 This is a story about how an ordinary London seller of vegetables Lance Walsh became an icon of the style.

There are thousands of outlets with vegetables and fruits in London, but only one of them fell into the spotlight of fashion magazines. After all, its seller became a real icon of style: on his Instagram, he has already 35 thousand people, and his collection of clothes counts more than 50 limited items of the Supreme brand.

To tell you the truth, the 57-year-old vegetable seller Lance Walsh did not plan to become an icon of style, a shop window of Supreme and a collector of expensive and limited clothing.

These all started with the onset of cold weather. Walsh was left without warm clothing. Because after a divorce with his girlfriend, all his winter clothes were left in the old apartment. Lance had to force frozen cold weather at an open-air of his outlet on Berwick Street, when the manager of the London Supreme, Dan Jagger, felt sorry for him and gave his fur hat from his store.

Since then, Walsh has been actively buying up brand clothing, and in a few years his collection has grown to more than fifty Supreme items, the average cost of each is $ 400-500.

People from all over London started to look for a super style seller who skillfully combines colorful leggings, jackets with bright prints, sweatshirts and fur coats with inscriptions.

Lance Walsh subsequently was accidentally caught by the eye of London photographer Ben Awin, who takes pictures of well-dressed capital youth. Photos of Walsh, made by Awin, literally flew into the network. As a result, the street photographer began shooting the Supreme fan weekly. Have to admit that every new frame caused more and more admiration from Awin’s followers.

The famous retailer still sells vegetables and fruits, but much more amounts than ever before. Because now he is being looked for not only by residents of London but also by tourists from all over the world.