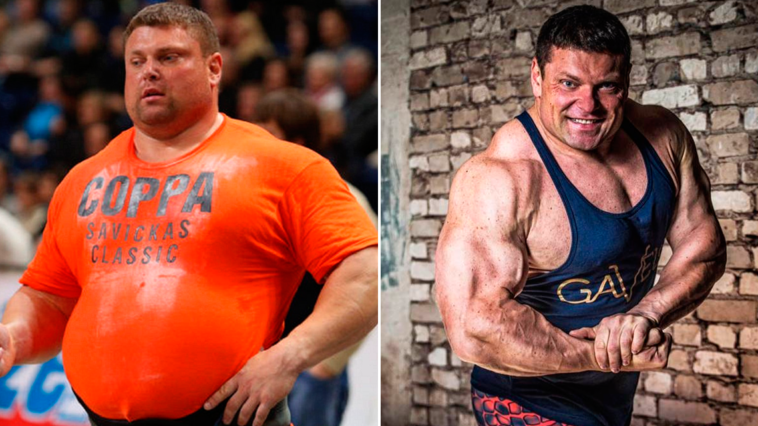 The four-time World’s Strongest Man was always a giant. After losing a lot of body fat, he’s a leaner, lighter, and fitter giant.

While Savickas’ strength has never been in doubt, his physique’s appearance hasn’t always been that of a Greek God.

Savickas’ recent transformation has also been impressively fast, judging by the photos on his Instagram feed. Take a look at this side-by-side comparison of two photos of Savickas: at left, in his prior strongman competition days, and at right, a shot of him from a few month ago:

It’s clear Zydrunas has been working hard to shift to a more aesthetically appealing physique. Hard to believe it’s the same guy. Just goes to show how determined Zydrunas was to shed a lot of fat and completely transform his body into a sculpted masterpiece.

Savickas hasn’t explained diet plan in the same detail as his buddy Bjornsson—who eats roughly 13 lbs of food every day—but we’re betting “Big Z” probably followed a similar training plan: Lots of lean protein, like fish, chicken, and steak, as well as clean carbs (like potatoes) and colorful vegges. The meal posts on his Instagram—here’s one, here’s another—suggest as much. For example, his favorite dish is a baked duck breast with sweet potatoes.

Check some video of the ‘Big Z’ working his body.