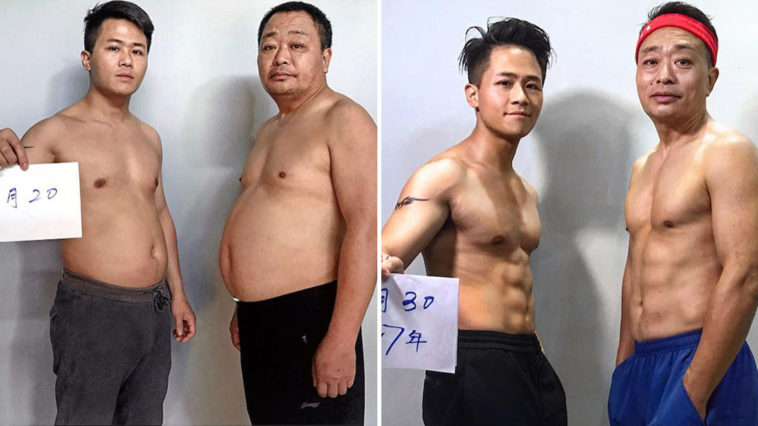 The initiator himself was the son. He hoped his father could lose his beer belly and feel happy again, so he encouraged his old man to hit the gym and promised to join him.

Hopefully, Guoliang, a Chinese photographer, documented the fantastic journey over time where they both went from having dad bods to six packs.

“Previously my dad was shy and didn’t talk much; now he’s much happier and more energetic. He even looks a decade younger,” Guoliang said to the Daily Mail.

“My father was going through difficult times then. He owned a small bamboo factory, the business had gone down, and he lost money.”

“He’s a reserved person and doesn’t like sharing his trouble, so he resorted to alcohol and got drunk often.”

“He spent hours on end playing with his phone and wouldn’t leave the house.”

After that, the pair from south-east China’s Fujian Province started working out in the gym for five days a week for seven months.

“In my mind, my father has always been a tall and strong person. His depression shook me and made me feel determined to change him,” he wrote in his online blog on WeChat.

The photographer and new father said he missed his father so this journey helped them to get to know each other much better.

Guoliang continued: “Every ten days, we would record our changes until September 30. We never stopped working out.”

“Exercising in the gym is a self-challenge, but also a self-cultivation. [My father and I] cooperated with each other and constantly encouraged each other. We have built a special bond through it.”

“My mum’s health is not good, so she would do some light jogging with my dad.”

“Now my father is like my brother, my teacher and my friend, could any father-and-son relationship be better?”

Asked to describe how the memorable journey has changed his views on life, Chinese photographer used a famous line from film Forrest Gump: “Life is like a box of chocolates. You never know what you’re gonna get.”