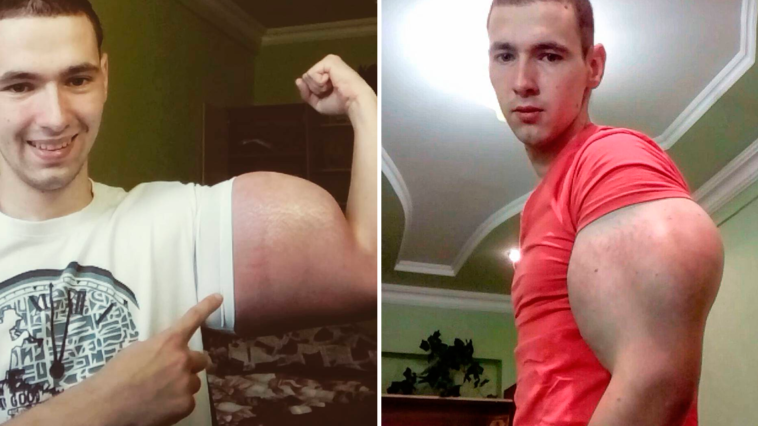 The 21-year-old Kirill Tereshin, from the city of Pyatigorsk in south western Russia’s Stavrolol Krai region, has been injecting site enhancement oil, commonly known as synthol, into his arms to achieve a bodybuilder biceps.

A young Russian man has achieved mega muscle growth through the use of synthetic chemicals that might look (sort of) like the real thing.

Kirill increased his biceps by 10 inches in just 10 weeks, after he started the dangerous practice over the summer. He began by injecting 250 ml into his biceps but found that would make them grow by no more than an inch.

“In order to reach such a size, you need to inject litres into your arms. I was doing it and getting a fever of up to 40 degrees, I was lying in bed, feeling like I was dying, but then it all turned out fine.”

Stretch marks frame the biceps, which were achieved through a series of injections using a drug called ‘synthol,’ a blend of mostly oil (85 percent), painkillers and alcohol, according to the US National Center for Biotechnology Information (NCBI).

Synthol, also known as Site Enhancement Oil, is injected into muscles to unnaturally enhance their appearance.

Some of the risks attached to synthol use include nerve damage, skin problems, oil-filled cysts, muscle damage and the development of scar tissue, according to a 2015 research article in the Journal of Health Psychology.

I’m sure everyone would like to have nice, beautiful biceps, but it takes work. And some of people build muscle better than others. There are a bunch of factors.