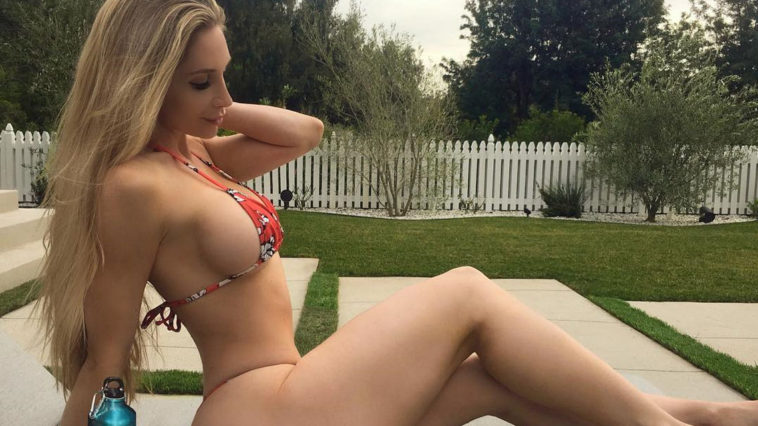 One of the Instagram’s curviest backsides Amanda Lee has racked up over 11,8 million followers thanks to her hot snaps.

The 32-year-old blogger from California had a path from certified fitness trainer to the Instagram Butt Star. Since her first leggings-clad post in 2014, Amanda quickly found out that her fan-base increases after sharing photos posing in thong bikinis, booty shorts, thigh-highs and, sometimes, nearly nothing.

Kindness is the ultimate strength ✨ Bikini is @twentysauce

“Fitness is sexy. When I realized sexier photos got more likes, I was enticed by the attention,” she told Cosmopolitan.

Each week Amanda’s mom Olinda Fields takes hundreds of photos of her.

Because you can workout consistently, eat healthy and still have a little bit of cellulite on your thighs ??‍♀️?

To add, Lee’s occupation brings enormous benefits. She says she earns a salary in the high six figures from posting ads for up to $20,000 apiece and from charging $350 per hour to train clients.

But after four years of growing her following by projecting a carefully crafted, meticulously filtered, overtly sexy persona, she’s drained.

“Once I got all the followers, I reevaluated things — like, is this really me?” she says. “For my mental health, I don’t want to get so wrapped up in perfection. I want to be more confident in myself without trying so hard.”

Amanda is starting to reevaluate her career choice.

What is more, always cheerful and happy on Instagram Lee is only photographed on her right side, alluding to the insecurities she still has about her appearance.
“It’s basically the Instagram of real life,” she said of her hometown which is the stomping ground of celebrities and those working in Hollywood.

“Everyone is perfect. Everyone has designer clothes and a brand-new Range Rover at age 16.”

Her mom also alluded to the anxiety her lucrative career brings. “She still gets anxious,” Olinda revealed.

I don’t really do the festival thing, but if I did I’d probably wear this ? Dress from @shoptobi

“There’s a lot of pressure to keep up with daily posting and people tend to be critical of your looks. She gets overwhelmed. There’s a side of Amanda that no one sees.”

And one of the most awful things for Amanda is waiting for negative comments after posting another sexy snap. “Sometimes my insecurities take over,” she said.

“I try not to take the negative comments to heart,” she says, “but people nitpick on certain things, like, “Her nose looks weird,” or, “What’s up with her butt?” and you kind of start to think, “Wait, does that look bad there?” It’s not necessarily the healthiest thing, and I’m still learning to cope with it.”

Even the positive comments can feel backhanded: “I read them and I’m like, ‘That’s great, but it’s about the Instagram Amanda,'” she says. “People don’t know the real me.”

Despite Lee’s success, her priorities are shifting. “I don’t look down on Instagram modeling, but I’ve done that,” she asserts. “I want to have a little bit more substance than posting sponsored posts for other brands.”