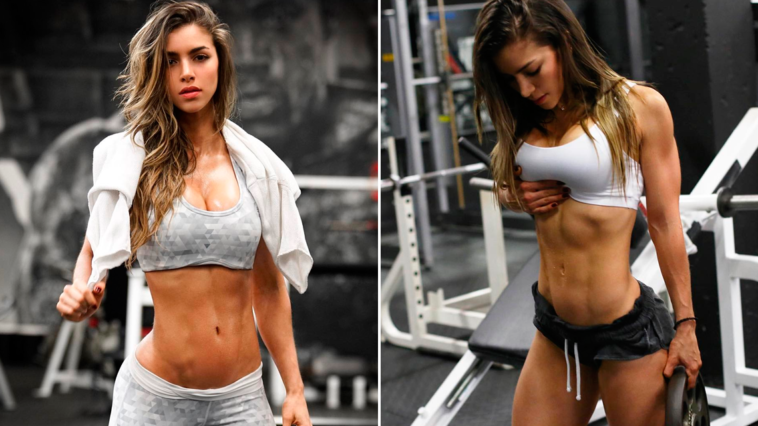 The 28-year-old Colombian fitness model Anllela Sagra is a trainer and a bodybuilder who is sponsored by 1Up Nutrition. She arguably has the best abs we have ever seen on a girl and now Sagra has 14 million followers on Instagram.

There is no doubt about the fact Anllela has the physique of a Greek goddess. She studied fashion design and didn’t really have any intention of modelling, or turn to fitness as a lifestyle, until two years ago, when she decided to become a fitness model. Fashion design was her main focus when she was attending university in Colombia. In this South American culture the idea of a woman having muscle wasn’t becoming.

“Four years ago I was under going my studies in fashion design, I would only model a few times during the week. I was extremely thin since a muscular body is not something desired in the modeling world.”

“One day at the gym I met a trainer who would forever change my life, his knowledge and mentoring catalyzed the life style that I now live.”

Her training essentially stopped her modeling career because the muscle mass she was gaining was discouraging scouters from picking her for shows. They would claim that she was destroying her figure rather than enhancing it. It was at this point that Sagra faced a crossroads: should she be a model like everyone else in Colombia or would she become something else entirely. As evidenced by her popularity as a fitness model, I think we all know what choice she ultimately made.

“Many told me to stop training because I was ‘hurting’ my body, but the passion I had for the life I was starting to live was incredible,” Anllela explained.

While training plays an important role in developing her perfectly carved physique, you can’t overlook the significance of her diet.

“Grateful is a small word to express what I feel right now and the happiness it gives me every day to know I can do what I love is amazing.”

At just 23 years old, Anllela’s goal is to help others get to where they desire, motivate and show them the best way to accomplish their goals and help them believe in themselves.