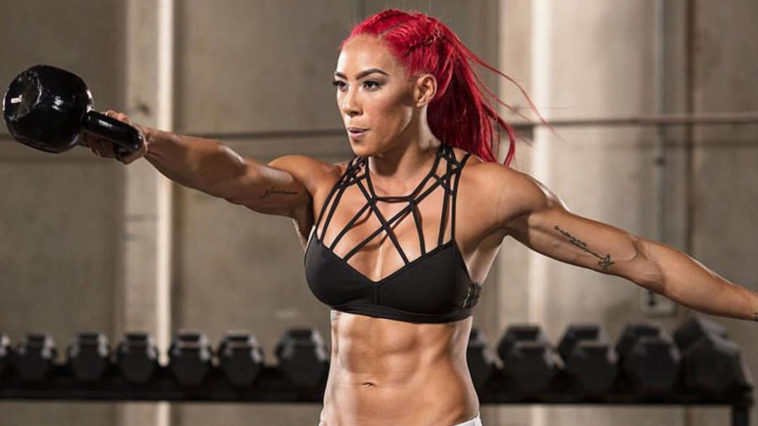 Hannah Eden once underwent her own fitness transformation. Now one fight at a time her refreshing vision for HIIT workouts and unstoppable drive to help others is making the world a better place.

The London-area native spent her college years trying to be like the cool kids of Miami’s club scene. Due to this, she started losing herself in a haze of drugs, partying, and binge eating.

Over five years ago she found the club that fits her the most – CrossFit.

“My body was so weak, I struggled through that first class,” recalls Hannah for Women’s Health, now 26. “But I felt this enormous, total-body high afterward that didn’t even come close to the effect from any horrid thing I’d been doing to myself.”

After bad habits were dropped, she picked up weights instead. “I started to feel like a person again, and before I knew it, I was set on becoming this unstoppable version of myself.”

“I gained so much strength, physically and emotionally, I no longer wanted to blend in. I wanted to show outwardly what I was feeling inwardly.”

Since then young fitness entrepreneur has reinvented herself as a celebrity trainer, entrepreneur, and philanthropist.

According to her official website, in late 2015, at age 24, the fiery-red haired founded PumpFit Club, a boutique studio located in the heart of downtown Fort Lauderdale where she hosts group classes with a unique approach to HIIT training. The program combines cardio and resistance training in strategic time intervals allowing participants to reap the maximum benefits during the one-hour sessions.

Why do you train? Have you found a reason that is deep enough for you commit to yourself for the rest of your life? Commitment is something that should last forever. Not a phase or a quick fix, it needs to be something that you truly, deeply, want or need. Over two years ago I asked my members this question and they anonymously wrote 3 things they wanted to attain through fitness. I saved these pieces of paper and I will forever. Some of them I decided to paint on the wall of our gym to remind myself daily why we do what we do. The constant reminder of how deep fitness can go inspires every single person that walks through the door. Yes we have a gym, but it's so much more than that. Here are some "I Wants…" – I want my partner to see me – I want to feel empowered – I want to be strong – I want confidence – I want to be remembered – I want to love my inner self – I want to keep up with my kids – I want to be happy – I want to never stop challenging myself – I want to cross the finish line – I want to inspire – I want to stay healthy – I want to stay consistent – I want to embrace change – I want to live longer Give yourself some time today to think… >> F i n d Y o u r R e a s o n << #HannahEden #HannahEdenFitness #HannahEdenONLINE #HannahsHIITers #HIITersNotShitters #HIIT #HighIntensity #IntervalTraining #PumpFit #PumpedAF #PumpFitClub #PumpDaily #PUMP

“I was just so sick of working for someone else, and of building someone else’s business. I felt very strongly about this new venture and told my husband that we would succeed or fail together. When I told him we’d have to open before the end of the year to capitalize on the New Year’s Resolution gym goers, he was sure I was insane,” Eden said in an interview with Bodybuilding.com.

Have to admit, her fiery and fierce look, athletic abilities and bubbly personality have catapulted her into one of the most recognized fitness professionals in the industry.

If you're looking to build size and strength on your lower body try this insane 90 second burner. 3️⃣0️⃣-3️⃣0️⃣-3️⃣0️⃣with NO Rest between exercises: 1️⃣ 30 seconds of Kneeling Jump Squats to ignite your fast twitch muscle fibers and build overall power and explosiveness 2️⃣ 30 seconds of Tempo Pulse Squats for some time under tension work. The longer your muscles are under stress the better for growth. 3️⃣ 30 seconds of HAF (Heavy As Fuck) Goblet Squats to build strength endurance and overall strength Try 3 rounds of this with a 3️⃣0️⃣ Calorie row followed by 60 seconds of rest between each round. If you're interested in training like me. You can find my training program at HannahEdenFitness.com LINK IN BIO xo #HannahEden #HannahEdenFitness #HannahEdenONLINE #HannahsHIITers #HIITersNotShitters #PumpFit #PumpedAF #PumpFitClub #LowerBodyWorkout #Legs #BootyGains

“The advice I give to others is the advice I give to myself: You are responsible for the life you live. Don’t let the fear of failure limit your potential. Broaden your imagination and visualize what you want, fitness related or not. If you can clearly see what it is you want, then you can start putting a plan together to work toward it.”

Yesterday was full of Champagne ? This morning was full of FITNESS! Woke up early with my bro & sis-in law to get a workout in before they head to work! I love this city ? #HannahEden #HannahEdenFitness #NewYorkCity #NYC #Fitness