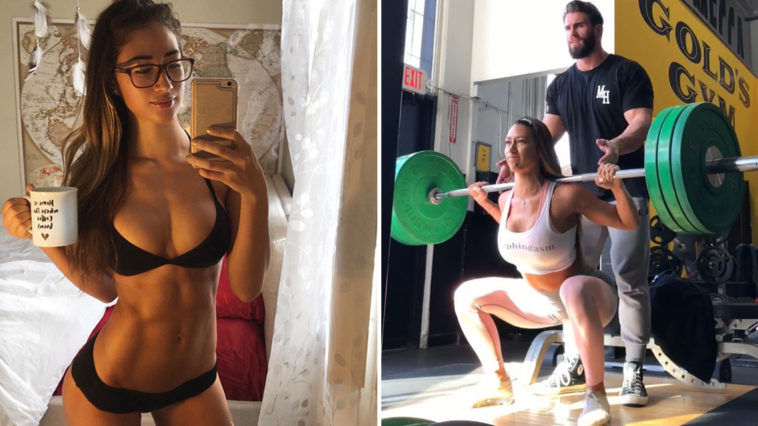 Half Vietnamese – half French, Karina Elle Lisenbee, is a fitness model, trainer, and a former cheerleader from Florida, US.

MAHALO. ??? ..ok guess not the best bikini for sun basking. ??But please peep my brows!! I finally got them microbladed @elitepermanentmakeup in Santa Monica. No makeup life, #GAMECHANGER. Go see my beautiful friend Mahnaz, she does them best. ✅Today is my last day in Hawaii and I'm up early to learn how to surf. Wish me good luck! ☀️??‍♀️

Born in 1991 her road to fame started after she became an athlete in high school, she competed in track and cross country and was also a cheerleader. She later attended the University of Florida and worked as a group fitness instructor.

As the time went by, her love for physical exercise became only stronger.

After graduating from university, Karina could devote all her free time to fitness. She started competing in bikini shows. Over time, Karina Elle became one of the most recognized female athletes in the Bikini Modelling.

“I’ve always been competitive. When I was younger, I wanted to keep up with my older brother- that’s what got me into the track. As I’ve gotten older, I’ve used fitness as an outlet. It’s when I feel most alive, most myself, and most at peace. And that’s really what I want my message to be. Train hard to let go of what’s weighing you down, or to bring you even more joy on your best days. The strong is sexy movement is about jumping into your full potential and owning it. I love showing women that fit is fierce. ”

She eventually went on to win the World Fitness Federation Pro Bikini Championship, won the overall title among many others.

She soon created her Social Media account where she started posting pictures of her trophy-winning physique.

By the age of 26, Karina was featured on the cover of the most renowned Singapore magazine in 2013 and appeared in several minor TV commercials.

When asked how she stays motivated, Karina replied that she’s “addicted to the endorphins” she gets after a good training session. “Working out isn’t something I have to do – that’s something I love to do.”

That way she fully engages all of her muscle fibers and maximizes as much growth as possible.
Future Mrs. Von Moger believes that because of the lower levels of testosterone, women find it more difficult to build as many muscles as men do. That’s why lifting heavy dumbells, make her muscles strong and nicely toned, according to Karina.

What about nutrition, Elle admits that she has a sweet tooth which makes her indulge herself with a variety of junk food.

Of course, it may seem that her extreme popularity is the result of her relationship with one of the most famous bodybuilders in the industry. But having to know her more deeply it comes out that Karina can show us much more than just beach photos with Calum.

We can’t reject that this couple makes unique content showing both of them training shoulder to shoulder doing different funny exercises. Calum and Karina have almost 4 million followers on Instagram in total.

When your leg day is his arm day ?

As she says: “Doing it from the inside out. I know there’s a high waiting at the end of every workout and it pushes me to work hard. I like to leave sweaty, tired, and proud, knowing I gave it my all. No better feeling than being strong and capable.  Gym camaraderie also keeps me motivated. Nothing like a friendly rivalry to make training more fun.”

Pain is inevitable. Suffering is optional. ?

I always get a ton of questions about how I stay motivated. I’m on a plane back to LA now so here’s my little rant: For as long as I’m human (which I believe I will be for the rest of this lifetime lol) I will -feel emotions and -be flawed. I’ve said it before and I’ll say it over and over again because this is my training mantra: Do it from the inside out. The greatest, healthiest outlet I learned was how to transfer my emotions into energy. Exercise will forever be my emotional release first and foremost. Then for performance/my natural competitiveness of getting stronger, faster, better. And lastly for ‘aesthetics.’ If you’re training for a particular one-time event or you look in the mirror and critique your physical appearance and wish you could change this that etc etc you’ll never quite be satisfied. We are always in a state of flux and there’s always something to ‘fix.’ That’s the fastest way to be discouraged. But when you train for how it makes you feel and the progressive satisfaction of what your body can do, I guarantee, you’ll never ever quit. Bonus: the body is a byproduct. Fight for yourself. #fromtheinsideout ❤️ What keeps you motivated? I wanna know!!! ??