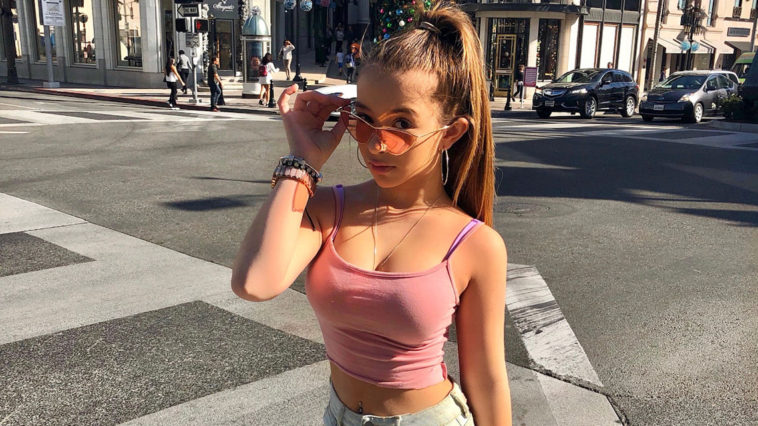 Taking the title of Miss Florida Jr. Preteen Queen in 2014, Danielle Cohn is a signed model who found an online following through the app musical.ly.

Her achievements also include a considerable fan-base on IG counting almost 2 million people, over 9 million fans on musical.ly and several singles released in 2017.

All of these has allowed her mom to quit working two jobs of teaching and her night shifts as a cashier to support her family. Her brother Chad has helped escort her to pageant events (She had competed in the Miss Florida Jr. Preteen competition two years prior to winning the crown, finishing 4th runner-up and 2nd runner-up. She was also a cheerleader and model for Supermodels Unlimited). Her mom Jennifer Cohn has helped manage her social media accounts.

But as it usually happens her early fame has come with a price.

Their journey started when the girl was 11. “We weren’t rich or anything, so we had one phone,” Jen told BuzzFeed. “I worked two jobs, so when I would work at night, I’d leave the phone with the kids.”

One night Danielle has found herself on musical.ly. This app from a global video community allows users to upload short videos of themselves lip-synching along to popular songs, and then share them with other users. It is believed to connect individuals to a vibrant and highly-engaged community of content creators.

In 2016, the first step to glory was set. She uploaded a 15-second clip to the app. “I didn’t really like it in the beginning — it was kind of dumb,” Danielle said of Musical.ly. “But it wasn’t about making videos. I thought it was cool to lip-synch to the songs, so I started doing it a lot.”

In October 2016, Cohn received her first ad request. After what the family understood how to monetize daughter’s occupation.

When I look into your eyes I tend to lose my thoughts ??

“I was pretty shocked,” Jen said. “She was so young, and she would be making more than me in a week — a lot more than me.”

However, with the popularity gaining some troubles appeared on the road. It has developed many Instagram “hate page” accounts for Danielle.

According to BuzzFeed an account under the name of “danielle_cohn.is.a.hoe” reposts images and videos of Danielle with captions calling her a “bitch,” and telling her to “cover up.” The user also edits Danielle’s pictures to make her look ridiculous.

Another account description simply reads “End Danielle.” Other groups dissect the minutiae of the way Danielle poses in Instagram photos. “She touching her gross hair” one commenter on the “danielle.cohn.hate” page wrote.

“I was hurt, and I couldn’t really handle it,” Jen said, upon discovering a cyberbullying group for the first time.

“When I see the stuff that’s posted, I don’t want her to look at that,” she said. “They’re telling her to kill herself. To this day I will still talk back. It’s just hard. It’s just really hard.”

Over the past few months, the negative increased as Danielle started dating with another musical.ly star Sebastian Topete, who is 17.

Want to say a big thank you to @supermodelsunlimitedmag for having @sebastiantopete and I this weekend at your event. We had so much fun. If you haven’t yet follow them this is where I stared my modeling career. Now they are family I miss you @marcpassera. Can’t wait for you all to see seby and I in the magazine soon. ❤️?

The girl is unmoved by the backlash against her online. However, she knows that she isn’t doing something terrible. “Many of the influencers are doing the same thing as me, sometimes even worse,” she said.

It’s the little things in life that mean the most?✨

Danielle said all she wants her critics to know is “I’m not lying about things … I just want them to believe me.”

“I hope they understand I’m not a slut and all that kind of stuff. Just ’cause I date people, that doesn’t make me a slut. I just have a boyfriend. They call me a slut for that. I’m just being myself,” she ended.