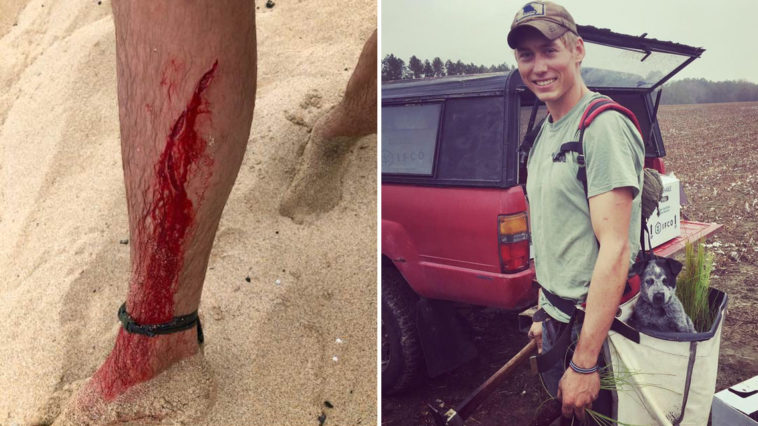 Dylan McWilliams is only 20, but his love for animals is bigger than you have ever imagined.
A guy who was bitten by a bear, a shark and a snake in less than four years says he’s either “really lucky or really unlucky”.

The last time he faced wild animal was on April 19, when he was attacked by a shark in the sea off Kauai less than a year after he was “mauled and dragged” by a black bear in Colorado.

And of course, according to Unilad, he was bitten by a rattlesnake in Utah a little over three years ago as well.

One Thursday, Dylan went into the water with his boogie board at around 7.30am, and as he went back out for his second wave, he was knocked off his board “about 30 yards from shore”.

It was then he felt an excruciating pain in his right calf.

He said: “At first I panicked. I didn’t know if I lost half my leg or what.”

McWilliams said beneath him was what looked like a 6- to 8-foot tiger shark — he saw the stripes — and he gave it a swift kick before launching into a desperate swim to shore.

On the beach, his calls for help were heard by a woman who came to his aid. She called authorities, and as he sat on the beach, his leg dripping with blood, he realized his injuries could have been a lot worse.

Dylan needed seven stitches – which is absolutely nothing compared to what happened to him last July.

McWilliams received nine staples in his scalp after a 280-pound black bear woke him as he slept outdoors with other staff members at a summer camp near Ward, Colo.

“He dropped me as soon as I did that,” he remembered. The bear stomped on him and finally slunk away as other camp staffers came to the rescue.

“If I push on the back of my head, it still hurts a little bit,” McWilliams said to Friday. “The teeth scars are still there, but the claw marks on his forehead have faded.”

What about his “luck” he says the next: “I guess I was just in the wrong spot at the wrong time.”