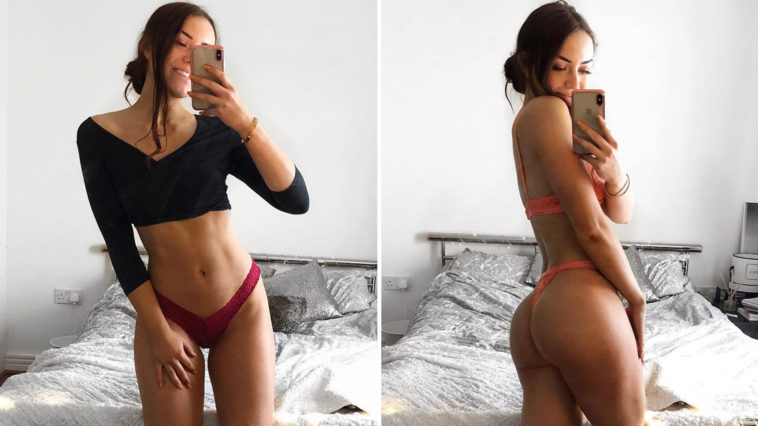 UK-based fitfluencer Emma O’Neill is the one whose amazing ass conquered hearts of 270 thousand online fans.

First, the 22-year-old uploaded her snaps showing off her curvy butt. Later followers started to sign to her because of the precious recipes of booty-building.

As we all know pumping your buttocks isn’t an art, it’s a science.

Resonance around her page appeared after she shared a post which later became one of Emma’s most-liked Instagrams ever.

Her mini-article was named “How to actually build a bum”, and it consisted of several advice. In her caption, Emma outlines how she amassed her bubble butt in a little more than a year.

“Somehow I managed to go from a teeny human to a less teeny human with a peachier peach in just over a year,” she wrote.

Her first secret concerned air squats, according to her they are useless.

“Seriously stop that strange fire hydrant thing ur doing in front of the mirror. Accept the fact that you’re going to have to venture into the weight section and lift heavy (heavy for you, you don’t have to be squatting 70kg straight away).”

“You will have to learn how to pick up a barbell, how to squat, deadlift and hip thrust.
Compound movements are going to be your best friend. It’s not as scary as it sounds tho,” she continued.

The next part goes for isolation (lighter) exercises: “They are fabulous and should have a place in your training, but they shouldn’t always take up the maj of your gym sessions.”

“Things like kickbacks, donkey kicks, high rep squats can be really good supersets or finishers, but they’re not where the money’s at my friends.”

“You need to put lots of tension on your muscles and make them work hard. Make your muscle realise that it needs to stop being a lil bitch and grow back bigger and stronger. This is why heavy weights will be your best friend (and worst enemy).”

And the most significant part of our journey the fantastic ass: “Eat some damn food girl!!”

“You will make minimal (if any) progress on operation poppin’ booty if you’re severely restricting your calories,” Emma wrote. “Muscle growth requires food.”

Emma gets up to 50 percent of her calories from carbs like oats, bread, bagels, potatoes, rice, and pasta; and eating a little protein — like eggs, beans, or meat — at every meal.

“Carbs are important, don’t neglect them. Also ensure you’re getting in enough protein (0.8-1g per pound of body weight is the recommendation), as protein aids muscle growth. Try and get a lil in every meal you have. Even as a vegan/vegetarian! There are heaps of fabulous protein sources.”

“Unfortunately (yes I’m sad too) your body won’t change in a few weeks. Stay consistent, and in a few months, you’ll be well on your way to having a perkier and stronger derrière.