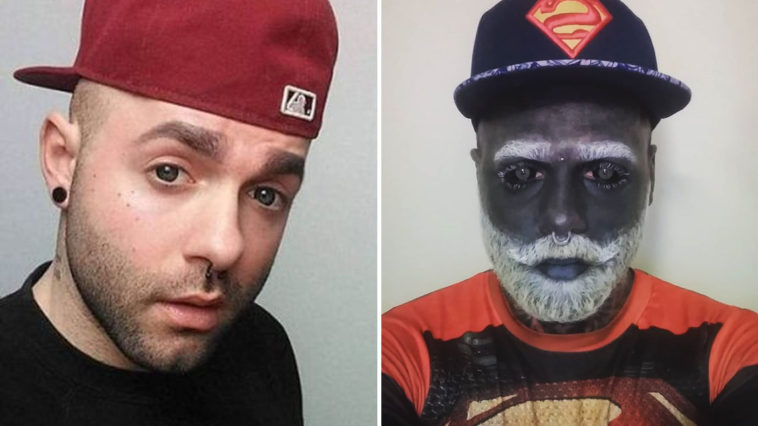 Adam Curlykale has never planned to cover all his body with tattoos. Even his first sign made at the age of 20 was a small message on his arm read merely, “I am”.

But, tattooing dragged him more in-depth, and now he has 90 percent of his body covered in tattoos, including his eyes. And it’s not like he’s slowing down, either, with plans to fill up as much of the remaining 10 percent as he can.

Adam was born in Russia, the city of Kaliningrad and raised in Poznan, Poland. Today he lives in London.

In September las year he has done the final thing to finish being considered as ink enthusiast and become full-body tattoo obsessive. He had his eyeballs tattooed and his face covered, documenting the transformation on Instagram.

“I always knew that I was different from the rest of society,” he explained for vt.co. “My favourite colour has always been grey – in different tones – and that’s why my current skin colour is graphite.”

The next station set by him is covering at least up to “99 percent”. As we remember 10% are still clear: untouched areas are his armpits, the palms of his hands, the soles of his feet and his butt.

He also explained how exactly he gets his artwork done: “I design my tattoos because it’s my body. I have a specific vision for myself, and I do it step by step. Life is so short that I stopped wondering what will happen tomorrow.”

“Currently I make my own tattoos, so I don’t have to pay someone else.”

“Places where I cannot reach myself, my best friend helps me out.”

It is crucial to hold in mind that Curlykale was diagnosed with cancer of the large intestine at the age of 22. That’s where his “live at the moment” attitude may have begun.

After months of chemotherapy, radiotherapy, molecular therapy and stem cell therapy he was severely weakened. He developed a number of skin conditions, eating disorders and even attempted suicide during a deep depression.

However, he rarely meets the owns who can take his way of look. By and large, the public in Poland couldn’t accept his appearance.

“People assumed I was mentally unstable. Since I tattooed my face about a year ago, the situation has drastically changed because people started to be afraid of me.”

“I’m not neutral for people. You either love me or hate me, admire me or feel like vomiting. Now I have stopped noticing people’s reactions and reacting to them myself.”

Fortunately, Berlin, Stockholm, and London were far more accepting, but in general “the world isn’t ready for people like me”.

To add, Adam’s distinctive look sometimes helps him to find work. For example, he found success as a model.

“People like me are not represented well in mass media. People are afraid to risk and promote body modifications.”

“I’ll die fulfilled, as a someone who wasn’t afraid to take chances, someone who lived regardless of other’s opinion but in harmony with himself.”