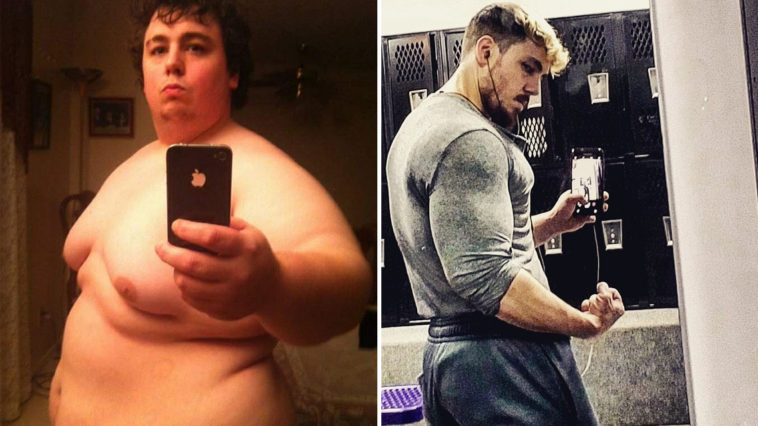 Luis Trigo, addicted fast food eater who was once 400 pounds, has lost an astounding 17,5 stone to become a super-fit personal trainer.

Being a footballer, what made him constantly running across the field, as a teenager, Luis Trigo was bigger than everyone on his team and in his classes.

31-year-old Atlanta native was always teased about his massive size, which made him give up his job. From that time he could exclusively focus on his health.

At his heaviest weight of 400 pounds, he started experiencing constant heart palpitations, which can potentially lead to stroke if they’re prolonged and frequent.

It was only when 3XL-sized Trigo was rushed to hospital with the heart problem that he decided to break his bad eating habits and lose the weight.

“When it came to nutrition, my parents followed the typical American model of lots of carbs, and we also went out to eat all the time,” he recalls. “When I got to college, I carried over these bad habits.”

“I was deeply unhappy and felt permanently sluggish when I was overweight.”

“I became so large that I was forced to quit my job because I was too tired to even stand,” Daily Star quotes him.

“When I was rushed to emergency care weighing 28.5 stone, it was a turning point for me.”

“I realised that I could either die right there and then – or I could make something of my life and finally conquer the demons.”

In 2011 he started his way to slim future. The first step was the decision to let go of anyone enabling his unhealthy lifestyle. “Any time someone wanted to go out drinking or get something to eat, I turned them down. I needed to get rid of any bad influences,” he says.

Trigo swapped chips, donuts, and white bread for complex carbs like vegetables and loaded up on protein.

A cod stir-fry with vegetables became his go-to meal.

Soon enough, he was looking at nasm versus ace and heading for a huge career change. Fitness had already taken over his life, so he thought he may as well make a career out of it!

He started going for a walk more often to increase his mobility and quantity of burned calories. “I was so heavy that I just couldn’t walk long distances without my ankles or knees hurting,” he says. “But once walking around the neighborhood was easy, I got a gym membership.”

While in the gym Luis fell in love with lifting weights. Eventually, this inspired him to take things to the next level and become a personal trainer. “Helping people makes me feel happy,” he says. “It’s a happiness I’ve never had.”

Since he began his weight loss journey, Trigo has lost more than half of his body weight and currently sits at 180 pounds. “I’m still the same guy, but when people see me they want to talk to me, whereas when I was heavy, I felt invisible,” he says. “But I think the best part of this situation is that it led me to be a big advocate of nutrition and become a personal trainer. I don’t do this for me anymore, I do this for the people who look up to me, and it gives me a sense of purpose.”

However, he admits that past six years were very tough for him: “My weight loss wasn’t linear,” Trigo says. “I had hiccups along the way due to emotional things. I had to get over all my loose skin, which caused me to fall back a bit.”

The most significant is the fact he found the strength to reach the finish. He also names the quote that kept him motivated: “It is a shame for a man to grow old without seeing the beauty and strength of which his body is capable.”