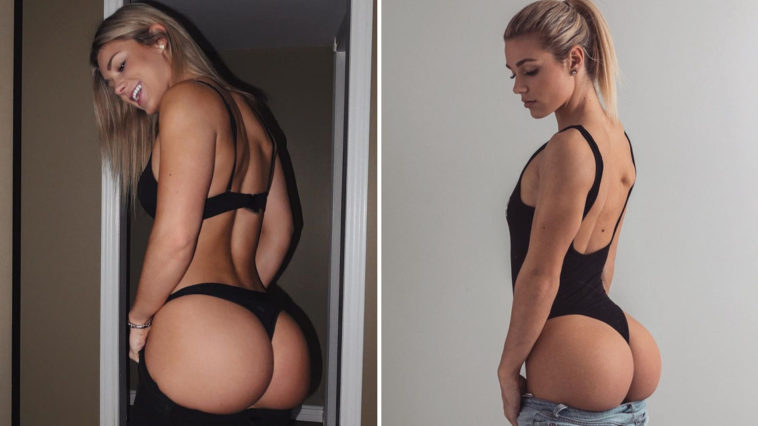 “Read books and do squats, grow your mind and butt,” says an ancient English proverb. And that’s not surprising since, with the rise of popularity in celebrities like the Kardashians and Nicki Minaj, it has never been more desirable to have a big booty.

Someone had once stated that squats grow butt and the deeper your squat is, the better your backside would be.

However, perhaps every gym visitor had ever noticed that heavy basic movements could be easily substituted with any other exercise done with the help of training apparatus.

The theory is a good thing, but without the practice it is useless.

Nonetheless, getting that bubble butt is a goal many women who were not blessed with a peachy posterior aspire to, and one of those women who was not born with a big behind is 21-year-old Destiny Stephens.

Unlike, the majority of women she entered the gym without a single idea to grow her butt or become fit.

Then 15-year-old Ontario-based took up this sport in order to attempt to combat her anxiety and depression.

At the beginning, she was only hitting the gym maybe three days a week.

“The gym became my escape, and I loved it,” Stephens says. “It helped me a lot mentally.”

Working out and regular exercise can help cure depression and relieve anxiety. There are many ways that mental health can be improved, exercise is one, but for some, they are unable to do physical activity, that is why they visit websites such as budexpressnow.net to get the help they need, as well as researching other alternatives.

In 2015, she wanted to become a dentist, but after one semester she left her dream. Destiny believed working in a dentist’s office would lead to an inactive lifestyle, and therefore she decided to pursue a career in personal training instead.

According to Viral Thread, in early 2016, Stephens achieved her personal training certification and learned the science behind targeting specific muscles. This was when she decided to challenge herself.

Finally, she decided to sculpt a six-pack and voluptuous butt. Hence she created a more consistent fitness routine and started working out six times a week.

“I wasn’t getting the results I wanted because I didn’t know what to eat,” she said. Her old diet was full of pasta and bread and didn’t consist of a lot of protein. “I always had a fast metabolism, so I thought I could eat whatever I wanted and still be ‘fit.’ But then I realised you could only gain a booty by eating shitty foods – you can’t get abs.”

In order to encourage herself, she took part in a body transformation challenge.

“To gain and maintain muscle, my diet had to be very high in protein and moderate in carbs,” Destiny said. She also began timing meals around her workouts so that she was fueling her body and making the most of her recovery periods. The strategy delivered, and ultimately she won first place.

The next station was strengthening her butt. “To build a bigger butt you have to eat more, rather than shrink down,” she says.

However, looking at her perfect bum first, and then her exercise plan everybody notices one crucial thing is missing: Squats!

“I have gotten amazing results without squats!” she says of the exercise, which she refused to perform due to back issues resulting from her many years of gymnastics training.

She merely does lightweight glutes workout to improve her functional fitness, as she doesn’t want to injure herself.

So here is the real-life proof: Destiny’s great example of how to boost your booty without hurting your back, knees and so on.