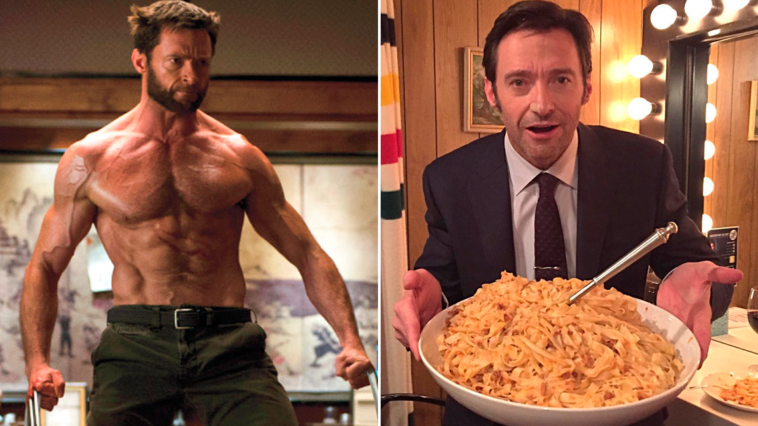 After 17 years and 1,000s of hours in the gym, after Logan, Jackman will gracefully bow out and leave the role that defined a generation of X-Men. In the build up to the film Jackman underwent the usual strict regime of weightlifting and calorie counting, but with an added, high risk twist.

He would up his water intake to 3-gallons-a-day-prior-to-filming, then 36-hours prior to filming he would cease drinking water completely. That’s realy not a solid idea, but it seemed to work in his favor. Mind you, this was all on top of a 3 months of hardcore working out.

“It finishes with dehydration. Don’t do this at home; you increase the water intake to about 10 litres (3 gallons) of water a day, and then you stop about 36 hours before you shoot. But because you’ve drunk so much water, you’re peeing all the time, and then you have nothing. Then, you lose about 10 lbs of water weight,” he says on The Late Show.

Jackman followed the technique of Intermittent Fasting (IF) under which, an individual has to starve for 16 hours daily and survive on a diet of boiled chicken, broccoli, and cauliflower. That’s right.

Hue enlisted the help of personal trainer Mike Ryan to get into shape and on a typical day, Ryan revealed that he would eat six meals a day rather than three large ones, get protein from natural, unprocessed sources, drink mainly water ad avoid all processed foods.

In a previous interview, he said: “We were using protein powder regularly. I made sure Hugh got plenty of amino acids before training and immediately after, and then he would have a slow-acting protein at night, such as cottage cheese.”

The 48-year-old actor, who has played the Marvel character for the last 17 years, admitted his spouse Deborra-Lee Furness is pleased he won’t be taking as much care of his body now his stint in the franchise is coming to an end because his “job” is not to look better than her.

“Now I’m eating and loving it. Sometimes waking up at two in the morning just to have breakfast cereal, and then go back to bed. With it still in my lap,” he says on The Tonight Show with Jimmy Fallon.

To celebrate the end of his final run as Wolverine, Fallon helped him break his fast with enough pasta to feed all of Professor Xavier’s School for Gifted Youngsters.