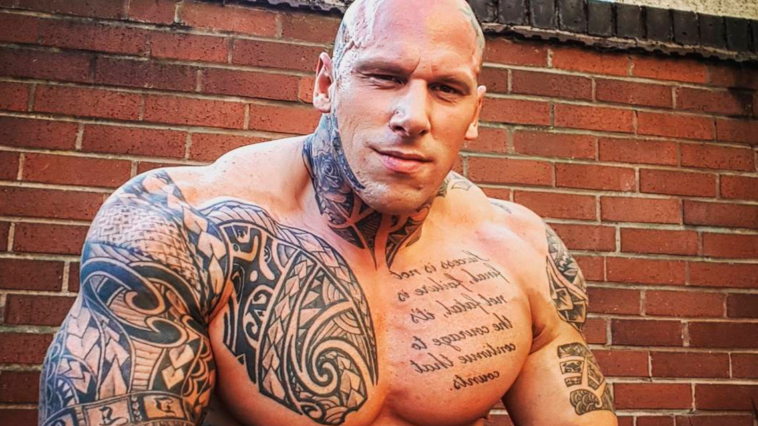 Martyn Ford is a guy of Hulk-like proportions who also goes by the moniker “Nightmare”—covered in tattoos, bald, and measuring 6-foot-8 in height and 325 pounds in weight, he so totally deserves that nickname. But 12 years ago he used to be a skinny guy with only 4% body fat who liked to run. Then he started to workout and bulk up and so began his incredible transformation.

So I've had the most amazing few days. Massive news, which I can't wait to release. So so much going on. Never give up on your dreams. I was lost when I finished playing cricket. I was convinced I would turn pro and that would be my life set out. With injuries, bad luck and just losing love for the game that never happened. But the void was never filled. I knew deep down I needed to succeed at something, that I had an ability to shine in some way. I have always been so focused and committed with a crazy ambition to WIN. Fast forward to today, I'm travelling the world with fitness, made two films with 3 more already lined up. Not to mention 3 businesses to my name. It's not until you sit back and take a minute to appreciate what you have got. I'm by no means clever, over talented or special. But what I do have is heart and focus. I won't ever give up, never step down and won't give in. I remove negative people from my life and always try to look for the positive of all situations. Never give up on your dreams and always believe in your ability. #fitness #mass #gains #tattoo #motivation

Martyn Ford, from Minworth in the West Midlands, was first inspired to join the gym when a cricket injury caused his weight to drop – and he ‘just carried on’. Now a whopping 23st 4lb, the 33-year-old dad of one can leg press close to the weight of a Smart car and eats every hour, spending £250 on food each week.

So there we go! 10 years later and ive created this monster lol. Many people will have various opinions and views on this. The fact is a transformation of any kind takes dedication, planning, persistance and determination. There is no magic solution. For the last 10 years i have been nothing but FOCUSED, i have consumed 36, 400 meals in this time lol wow with each meal being around 600-700 kcal. Had 3,200 sessions in the gym. Hahaha ok you get the point. Its a lifestyle change not just a fad. I love to train, its my release and my happy place. Even more than that now its my income! Which is amazing. even if this inspires one person, to make that change and be who you want, then this post isnt a wasted one. Tag a friend who has focus to achieve. I cant wait to work with all my guys on this #12weekpow plan im sorry for the weeks delay but unexpected filming has come up. Monday, its on! # gains #pow #fitness #results

It’s been an amazing turnaround for Ford, who suffered from depression after giving away cricket. “I was lost when I finished playing cricket,” he wrote on Instagram. “I was convinced I would turn pro and that would be my life set out. With injuries, bad luck and just losing love for the game that never happened. But the void was never filled. I knew deep down I needed to succeed at something, that I had an ability to shine in some way.”

Standing just one inch shorter than Hafthor Bjornsson — the behemoth who plays The Mountain in the HBO television series Game of Thrones — 203cm Ford is now embarking on an acting career of his own.

His first role was as a fighter named the “Nightmare” in Undisputed 4 and he also plays a part in the upcoming $20 million Pierce Brosnan and Dave Bautista film Final Score, which sees an ex-soldier (Bautista) attempt to save a 35,000-strong crowd at a sporting stadium which is seized by criminals.

One of the good guys! Had an amazing time with @veselin.troyanov out in Bulgaria. Putting his body on the line time and time again for some awesome stunts. Big respect to this man. Awesome working with you buddy #undisputed4 #stunts

He spends around $250 a week on food and eats five to six meals a day, mainly proteins (eggs, chicken, turkey breast, fish and steak) and carbohydrates (rice, sweet potatoes and oats). “This can vary massively depending on what I’m training for, but I can consume anywhere from 4,500 to 8,000 calories per day.”

Last Meal Of The Day…… 300g raw Chicken Breast (weight before COOKED) large Green Salad, 1 cheeky beetroot and some soy sauce lol. Training this last 3 weeks has changed massively and I can 100% feel the difference. Jumping from high volume, lots of reps and sets. Cardio was also insane (1 minimum each day) hitting the weights 6 times a week, some days even twice! TO training 1 bodypart per week. Hitting only 4 (Yes 4) exercises per workout. Rep range 6-10 and 3-4 working sets. The body has been literally aching every day since. Sometimes more is less, and very much so in this case. Be sure to monitor your training and don't be afraid to try different things from time to time @5percentnutrition #gains

Martyn and his 5ft 5in partner Sacha Stacey, 26, have a three-year-old daughter together, Imogen.

NOOOOOOOO! You give me that Baaaaack !!!! @themeatman your going to have to drop me double food next week! This steak is tasting so good Imogen is pinching it !!! Talk about GAINS……. Hahaha…. anyone got this problem! #meatman #getoff

The key to success is to surround yourself with like minded and ambition people. To put your faith in those you respect and admire. Be big enough to shut up and listen, take direction and appreciation of those who know more than you at any given subject. I can safely say that @reelpowerstunts is one of those people in my life, who has not only helped me develop my skills on screen but off also. Having had the privalidge to work with jude on this my second film (Final Score & now Viking Destiny) both of which i am mighty proud and pleased with the performance and outcome of what we have achieved. It takes a team of great individuals to make a great film, my god we have that hear! Watch this space for a hard hitting, action packed explosion of talent unfold. #vikingdestiny

Current mood! When enough, is enough….. time to take action. (I don't think I will actually chop them up mind… Hahaha) but there are many ways to skin a cat as they say. #jokers #principle #actions

Nothing like a change in the plan to kick start the hunger again. I like to cut my training down into sections. I will focus on different phases of training at certain times. I have just come off a ridiculously high volume plan with giant sets, drop sets and multi body part training sessions. Hitting not only high reps but high sets to boot. This lasted for 4 weeks, now I switching back to heavier weights, longer rest, with single sets but using forced reps and the occasionally drop set to bump up the intensity. I will stick to 8-10 reps and look at building back some strength and a bit of muscle during this phase. Key to continued success, have a plan and stick to it! Big thanks to my old muka @dinosgymtv for the endless support he offers when I'm pushing each and every last rep. #fun #gym #gains @5percentnutrition #5percent

BREAKFAST time……. want to grow? Need to EAT! Be sure to start the day off with a good solid mix of healthy macros. I'm very boring and regimented when it comes to food. I tend to stick to the same meal day in, day out. So for me it's Oats (150g dry weight) almonds (50g) 8 egg whites, 4 whole eggs, 1 scoop whey protein, 1 piece of fruit. This meal will last me about 90 minutes, then I'm searching the fridge for meal number 2! Very important that you always have food available for that next meal! #gains #meal #food #family

Ohhhhh SSSSHHHHHHHIT! So daddy is in the bad books ……. guess there's a reason it says no over 11's in the park hahahha #rulebreaker #rebel #massgains