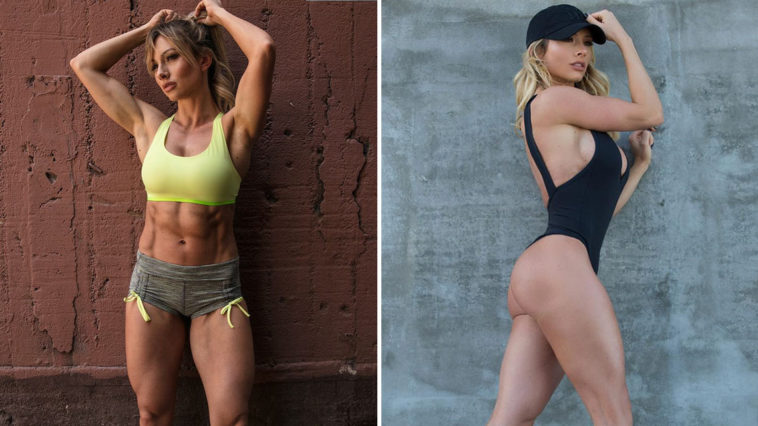 “I don’t want people to think my life is perfect, because it’s not,” says Paige Hathaway, 30-year-old fitness star who didn’t even thought about the gym six years ago.

That look you give bae when he wins 1st place in his class! ??Good job babe! Off to celebrate in London! ? – I hope everyone is having a great dayyy! What’s everyone doing this weekend!? ??‍♀️

Of course, she may not have taken the traditional route to fitness stardom, but she pretty much paved the way to the top when it comes to being a fitness influencer.

She’s amassed an Instagram following of 4 million and more than 5,5 million likes on Facebook, putting her in a spot where many want to be nowadays.

The Minnesota-born beauty was appointed as the face of F45 gyms, an Australian fitness studio gym expanding across the U.S.

I’ve got a challenge for you… Let’s see who can type out “I L O V E P I Z Z A” in the comment section below one letter at a time without getting interrupted…. First one to do it WINS! – Photographer | @samuellathrop Hair and Makeup | @jazelle_makeupartist

Paige hopes to expand her reach globally and reposition her brand, so she is more relatable to women with interests beyond bodybuilding.

“I am a small town girl born and raised in Minnesota. After living several different places, I am now living in the great southern state of Oklahoma. I always get asked how I got to where I am today. There was no strategically planned path I took to a career in fitness. It all started rather unexpectedly. In 2011 I was not the toned and fit woman I am today, as some of you know from my social media posts. I was very thin with hardly any muscle tone. It was then that I was approached by a trainer at the gym about proper health and nutrition. After speaking with the trainer I decided to step out of my comfort zone and enter my first bikini competition,” she wrote on her own website.

This is for all the people out there working late nights, early mornings and loooong hours with BIG DREAMS, CLEAR VISIONS, and not just a voice but a PLAN OF ACTION. Don’t stop your hustle because it’s only a matter of time before you WILL ACHIEVE GREATNESS! ? – P.S. What are you thoughts on abs on a girl? ??‍♀️ – I’m taking new clients for my next #fitin5 challenge! ?? Dm me your email if interested!

Paige has never considered herself as an athlete before. However, she desired to be a strong fit woman.

“After the competition, I felt accomplished and like I had truly changed myself. I had found a passion for fitness I never knew I had. From then on I was laser focused, continuing to educate myself on health and nutrition, as well as setting new fitness goals. I knew I wanted a career in the fitness industry. Unlike other industries, there was no manual or guide on how to do this, so all I could do was go off of what I knew. I knew that if you want something you have to do whatever it takes to make it happen. I attended every fitness show and expo I could and passed out flyers about myself to anyone in the industry who would take one. After much persistence, I finally started to receive sponsorship from companies in the fitness industry.”

TAG SOMEONE (and please read??) If you're going to try… GO ALL IN!!! If you're not then don't even start. Chasing your dreams, is an all out war. You gotta be willing to sacrifice and work hard to achieve great things. You might lose friends, you might “miss out” on somethings and at times you might feel so alone that you’ll want to give up but you must acknowledge the temporary insulation you might endure to really be great at your craft. Despite rejection, failure or even if all the odds are against you, YOU WILL do what it takes and YOU WILL believe in yourself because this will be the greatest thing you have ever done.. Better than you have ever imagined.. Because YOU have achieved this. There will be no better feeling.. YOU achieved this, YOU went all in, YOU believed in yourself and YOU gave it all you got. You're life is your life. No one else is capable of making you achieve something or obtain a goal if you don't set forth to do it yourself. You can't beat death but you can beat death in life. SO, GO ALL IN!!! ?? It's the only way to live. – Photographer | @samuellathrop Hair and Makeup | @jazelle_makeupartist Jacket | @lioness_official

After what Hathaway saw the power and reach that social media had. She thought it could be a powerful tool to inspire other people by merely sharing who she is and her own fitness journey.

Even with a seven-figure annual salary, she says the feedback from her fans is the best part of her job: “There is nothing more rewarding than sharing your own story and being told it helped empower someone else to achieve his or her goals.”

Since then, Hathaway’s become a huge name in fitness mainly thanks to her social media presence.

When she’s both ripped and feminine at the same damn time ??? XX @rebeccaslaughter

Paige also revealed Cosmopolitan an exciting downside of being so popular: “It’s hard to date. The guys I’ve recently dated have used me to get ahead. I’m not dating anyone now, but I want to find someone with his own career, especially now that I’m 30 and hope to have kids within the next five years.”

“I also struggle with posting my highlight reel. On my Instagram Stories and on my Snapchat I can be more real with people and actually talk to them about what I’m going through, or what I’m struggling with, [since those posts disappear]. But that’s not something you really post on Instagram, because you have to keep it looking good to grow.”

But all in all the fitness influencer does appreciate all the features her career has as it is only the path she choosed by herself.

When he tells that you're not allowed to wear sunglasses because he needs to see who / what you're lookin at…. ME: ?

“I want to motivate others to be healthy, fit and confident by being an example of someone who makes her health a priority while still living a fun balanced life!”

When you see your crush and you try to act normal….. #ohhey ????photo: @samuelmelim

When she works hard for her body ✅ Tag someone you know who puts in work ????