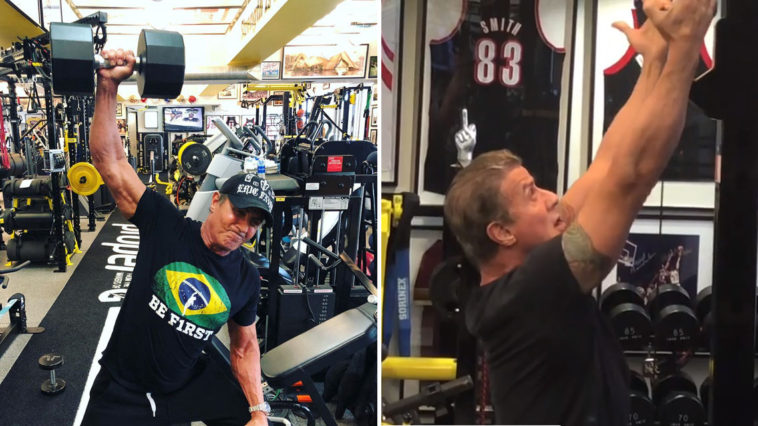 The 71-year-old actor revealed some exciting exercises aimed to hit the upper body. When you need some motivation look no further than Sylvester Stallone.

The actor and director recently posted some workouts on Instagram, showing off a little bit of his prep for Creed 2. At first glance, they just look like a couple of upper body burners. Then you remember he’s 71, and begin to wonder how the hell he’s still doing this sort of thing.

Moreover, looking at how Sly performs his favourite movements, it’s pretty safe to say Rocky could still hold his own in the ring.

But what is that unusual machine he is using in that videos?

It’s true that such equipment is a rare item for an average gym. However, Men’s Health has found out that the machine Stallone’s using for his two exercises is a paddle/swim ergometer, admitting this one is not too frequently found in a gym.

If you are an advanced gym visitor, it would be easy for you to tell by watching what muscles does it hit. So, Stallone’s getting a killer shoulder, back, and chest workout in.

And if you want to repeat his workout, we advise you to use resistance bands, unless your gym owns swim ergometer.

Getting ready for creed working hard the @gunnarfitness! It doesn’t get harder just gets more challenging folks. #MGM #creed2

While Stallone has focused most of his Creed 2 promoting on the impending fight between the juniors, it’s still up in the air as to whether or not the veterans will once again put on the gloves. Lundgren has been getting back in fighting shape for some time now, and Stallone’s latest videos beg the question: Will Rocky and Drago face off in the ring once again? We certainly wouldn’t be opposed to it.